Going to Up Helly Aa : true Viking experiences in Shetland-

Have you filled your childhood dreams with sails flapping in the Northern wind, Viking longboats off to faraway lands and proud Norsemen pointing their swords at the unknown? You must go to Shetland, the northernmost island of Scotland, and visit Up Helly Aa. 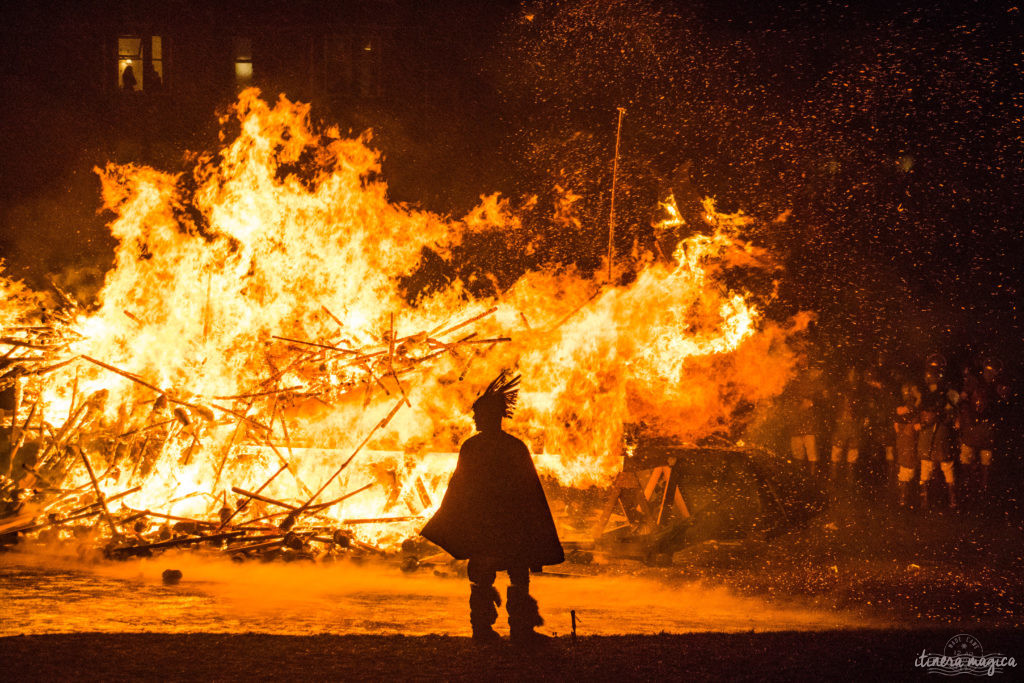 Seeing Up Helly Aa is something I won’t ever forget

Up Helly Aa? The best Viking festival in the world! 900 men dressed as Vikings, with furry boots, winged helmets and axes, holding blazing torches in the jet-black winter night, and setting a Viking ship on fire.

It happens every year on the last Tuesday of January: the town of Lerwick is invaded by a squad of “Guizers”, proud Norsemen ready to set the darkness on fire. Going to Up Helly Aa has been a dream of mine for a long time, and this year I knew it was now or never. The North was calling me…. 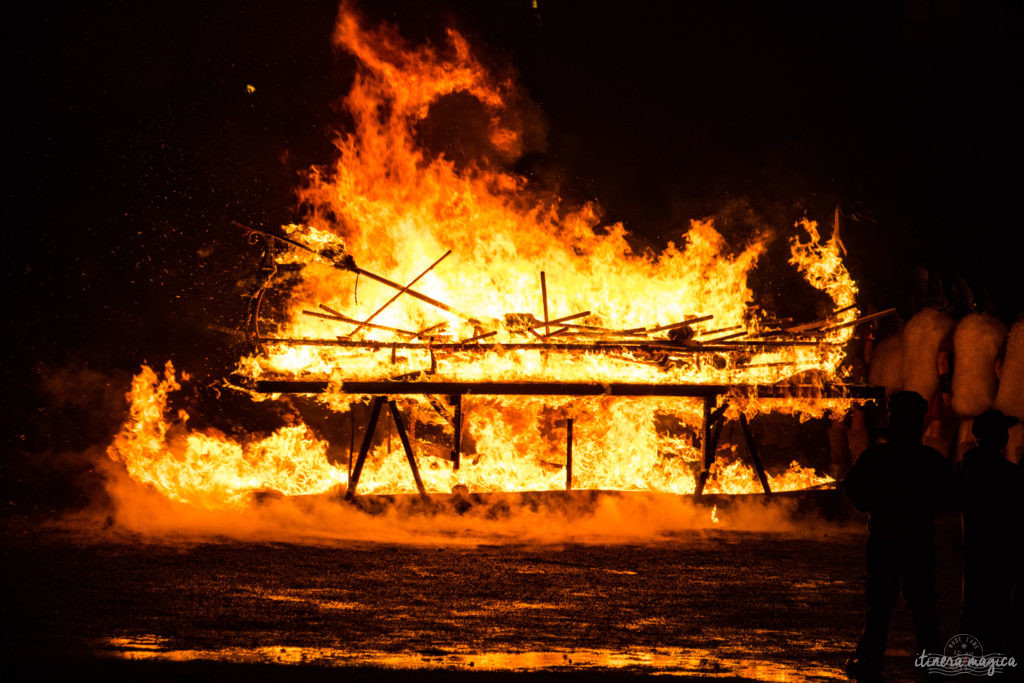 For 800 years, the Shetland Islands have been ruled by Norsemen. Shetland was at the heart of Vikings’ cold kingdom in the far North. The islands belong to Scotland since the 16th century, but Scandinavian culture is still alive, and in January, the Vikings come back.

During a whole year, the men of Lerwick carefully craft and paint a Viking longboat that they will sacrifice to the flames. Being part of the Guizers’ squad is an honor, but the greatest honor of all is to be Jarl Guizer: the chief! You have to wait for 16 years to become one. The funny thing was seeing how men start letting their hair and beard grow 6 or 7 years before their turn comes, so that hair length provided you with a timeline of the upcoming Up Helly Aas. 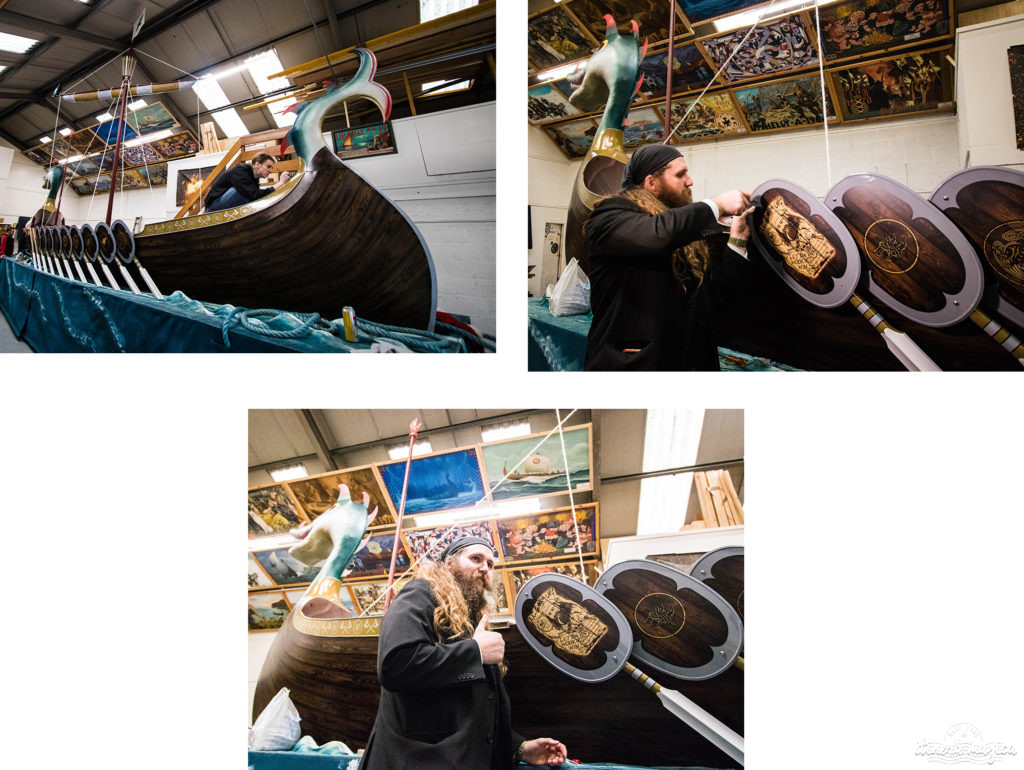 Norsemen painting their galley on the day before Up Helly Aa. Such care for a ship that will burn down! This is 2017’s Guizer Jarl, the chief.

A crazy night in Lerwick, Shetland

First teenagers aged 10 to 15 march at 5:30 PM, and it feels like a rehearsal of the bigger procession to come. There are hundred young boys and girls marching with their torches, and burning a smaller boat. 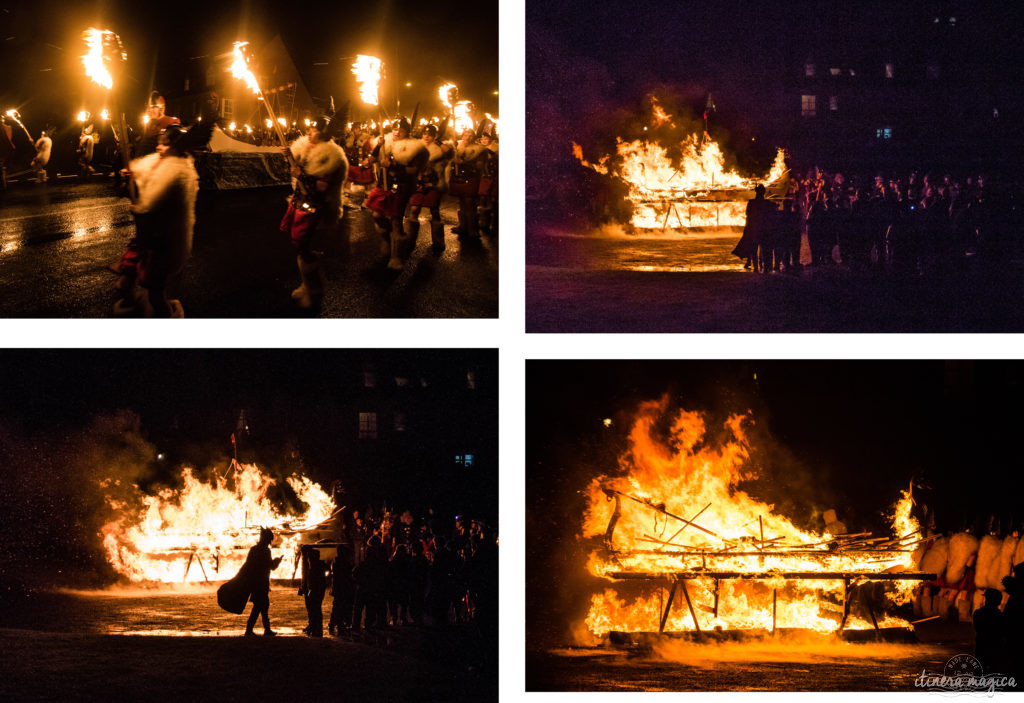 Teenagers marching at Up Helly Aa

Then you wait two more hours in the pouring rain. And at 7:30 PM it comes. The street lights go out, a firework explodes in the silent, anticipating night, and suddenly 900 torches go ablaze. The men sing old marine songs and start marching through the city, carrying the doomed ship. It looks like a gigantic dragon of bright fire crawling through the dark streets.

Gale force winds are howling, the rain is pouring, my camera lenses are covered with drops and the smoke of 900 torches burns my eyes. But the moment is mystical.

Very difficult conditions for pictures with pouring rain and strong winds… At first the torches burn red, then a wave of orange light sweeps over the city

A last song, a twirling maelstrom of fire, and then the men throw their torches at the galley. Another dragon rises into the night – fire burning bright, drawing evil shapes in the sky. It’s over – ashes in the air. 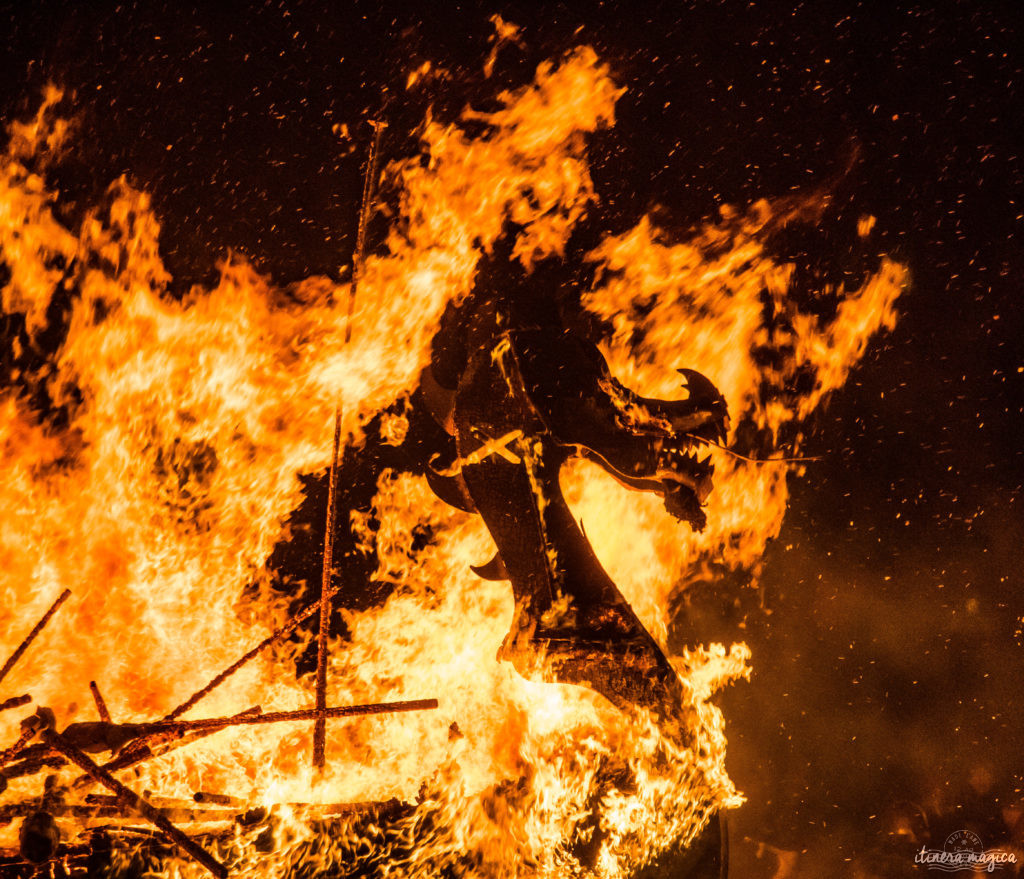 But the night is still young. The Vikings will party twelve hours long in private tents and houses, and beer will flow. It’s one of these moments when you know: once in a lifetime… 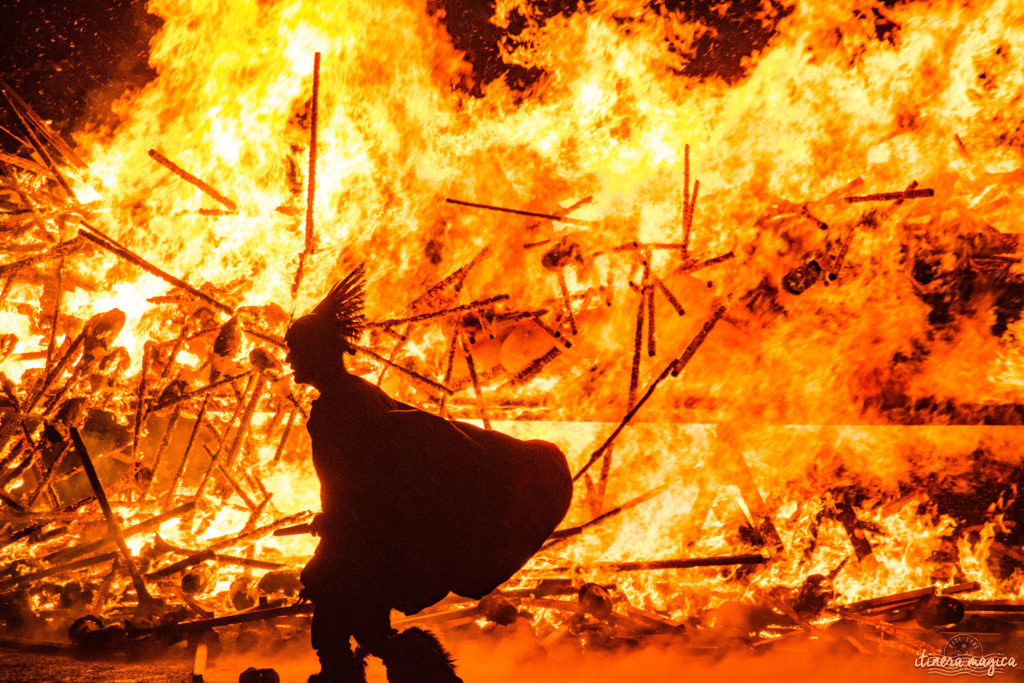 Hypnotized by the flames

Going to Up Helly Aa : an adventure in itself

The Shetland Islands are the northernmost, and most isolated islands of Great-Britain. Contrary to Orkney, which is relatively often included on a tourist route through Northern Scotland, Shetland is so remote and hard to reach that it remains unspoiled. I could drive for hours without seeing any other soul, lost in a barren, windswept landscapes straight out of Norse mythology.

But going there was a challenge. Shetland lies 300km North of Scotland’s Mainland, in the heart of the North Sea, facing Bergen in Norway. The flights to Shetland are very scarce and expensive, and it’s nearly impossible to rent a car in Shetland (the prices are awfully high, and very few cars are available). And don’t even try going to Shetland without a car, except if you plan on staying in Lerwick exclusively (which would be a shame, considering the wild beauty of Shetland’s lonely landscapes). Only one option remains: renting a car in Aberdeen, and taking an overnight ferry from Aberdeen to Lerwick.

From Aberdeen to Shetland: the ferry feels like an adventure

Flights have shrunken the world, but going to Shetland makes traveling feel like an adventure again. Imagine spending the night rocked by the mighty waves of the North Sea, in a cabin with sea view. 14 hours later, you set foot in Shetland.

I encourage you to discover the beauty of those raw, remote islands covered with sheep, pierced with steep cliffs and blessed by surprisingly light and soft white sand beaches. If you do read French, you will find a big, big article about Shetland here – if you don’t, just have a look at the pictures 😉

You can also see all the pictures in my Shetland album. 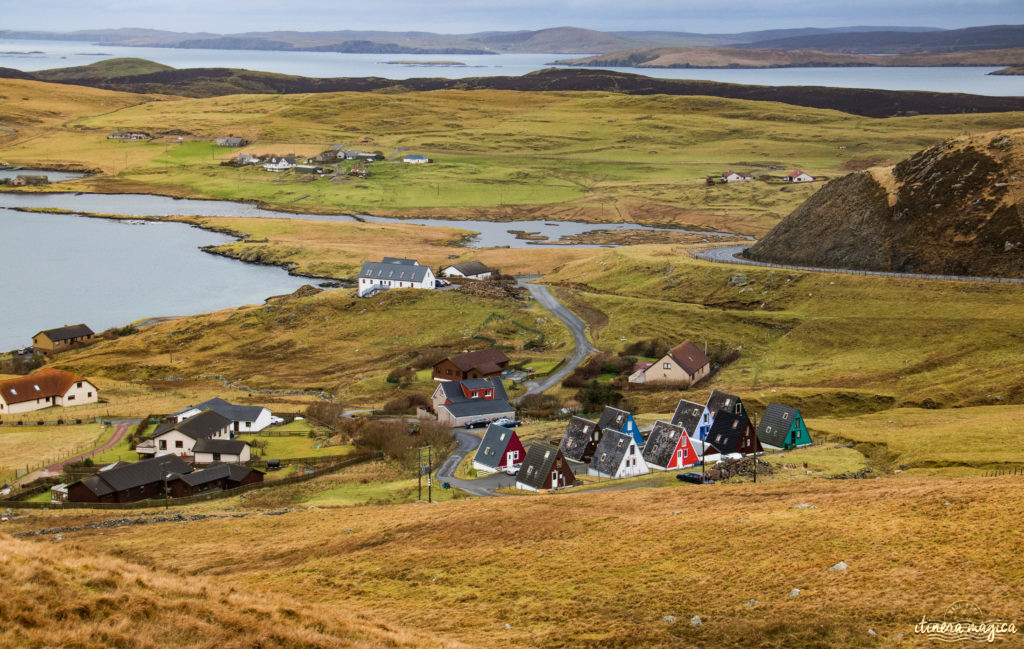 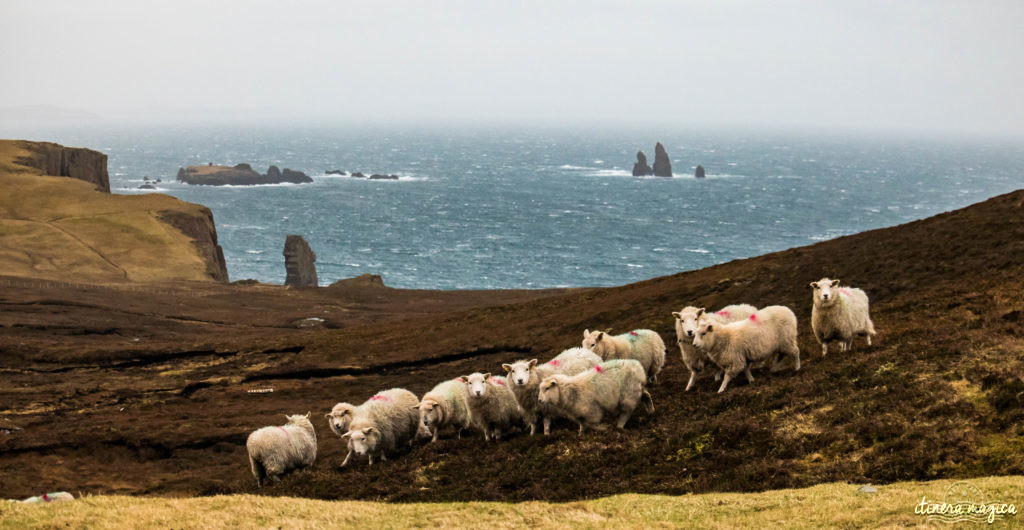 The biggest otter population in Europe lives in Shetland 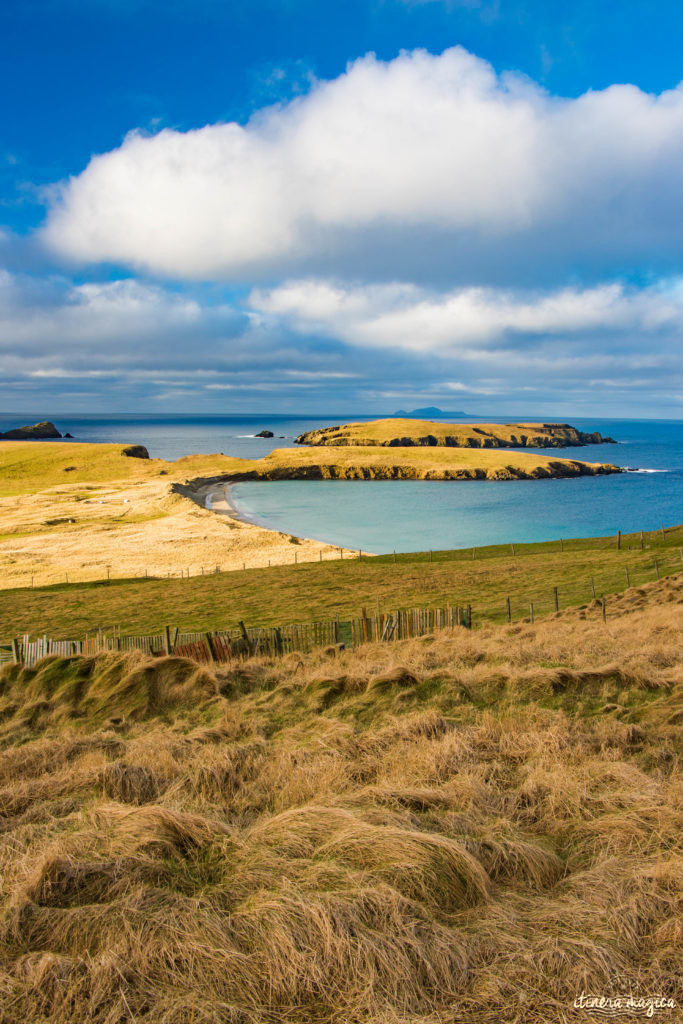 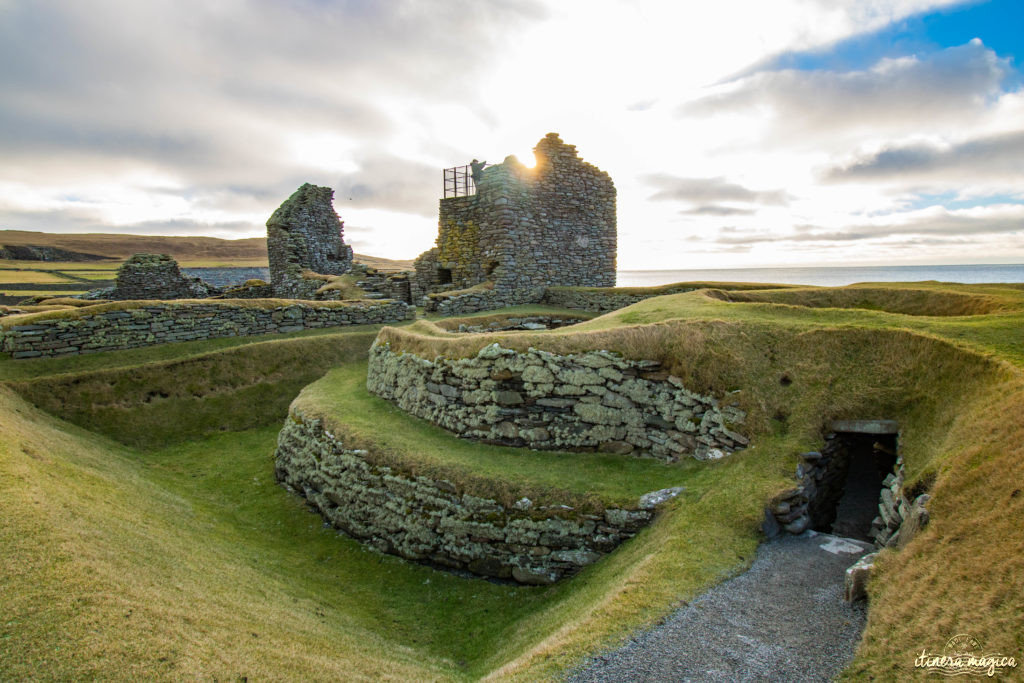 Jarlshof: the best preserved Viking village in the world 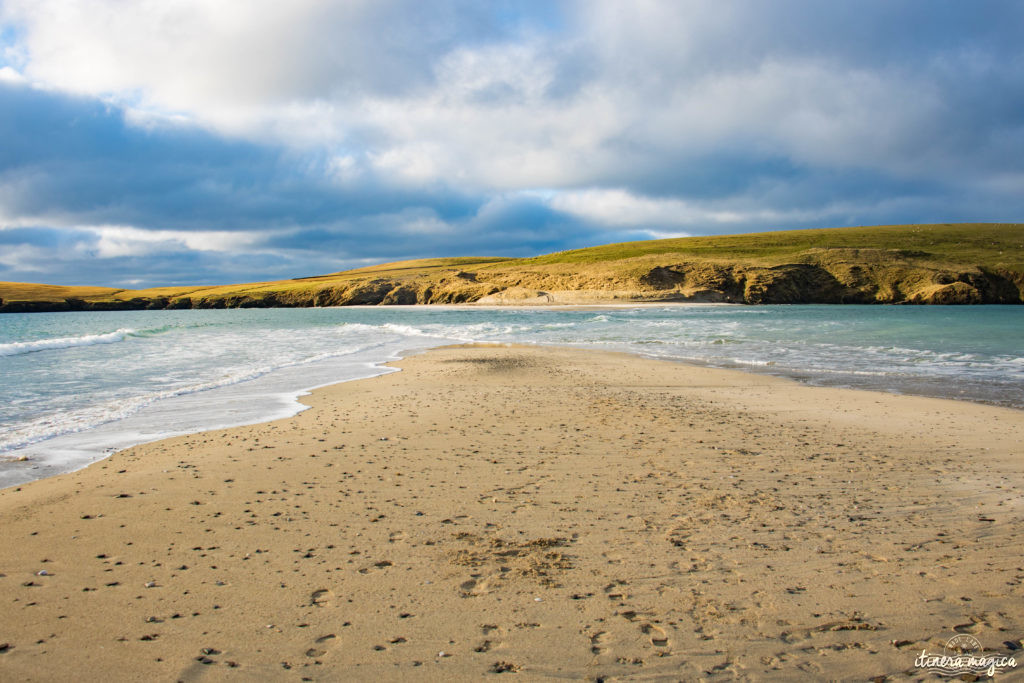 By low tide, you can walk up to the island of Saint Ninian 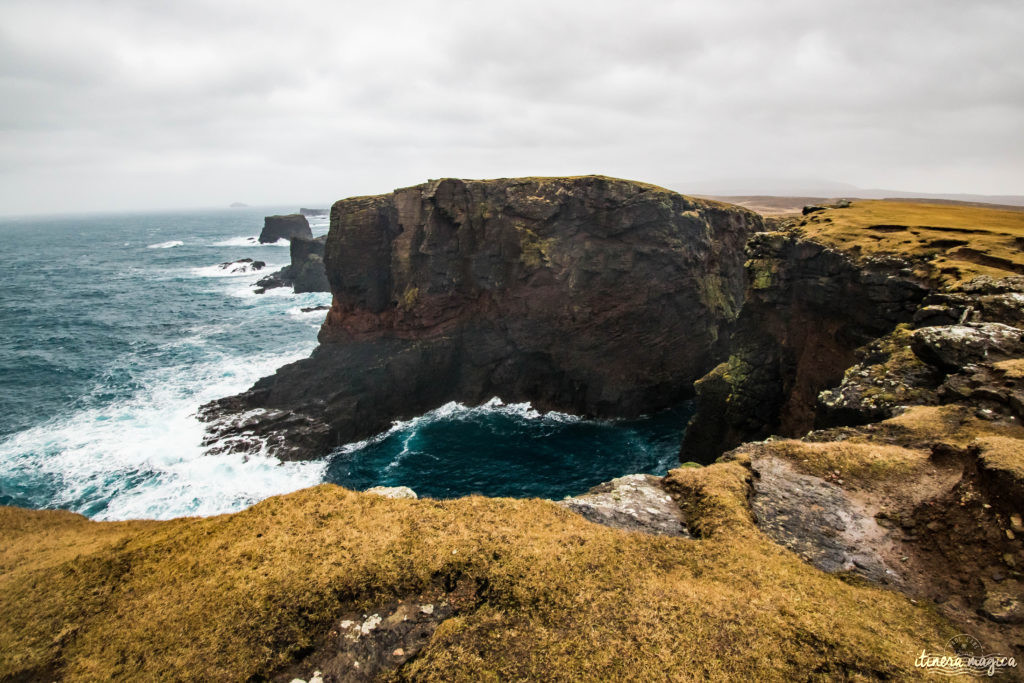 I would love to inspire you to discover those islands which truly feel out of this world. I went to Iceland last summer, and Shetland heightens my desire to explore the Vikings’ old kingdom. Norway, Greenland… where will the road lead me?

Please pin or share this if you enjoyed discovering Shetland and Up Helly Aa!