Venice – I don’t need to say another word, you already know. 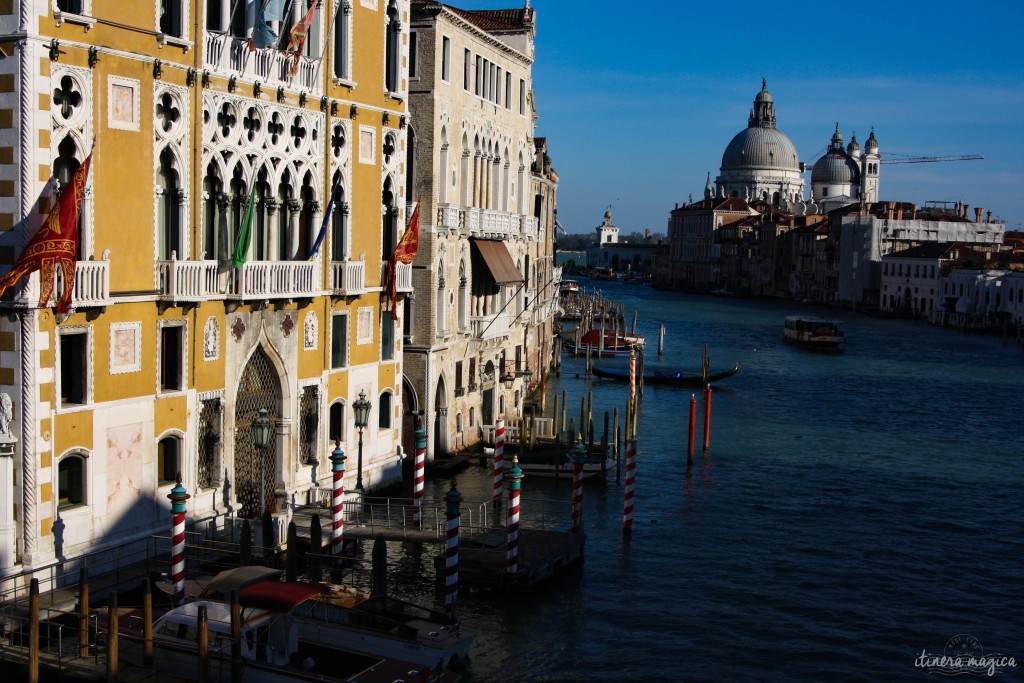 Venice belongs to lovers. This city isn’t simply romantic – it resembles love itself.

The name works like a spell, conjuring up the dreams we all have dreamt: a city of sand and glass, floating over water like a butterfly spreading its wings. A grey shimmering lagoon mirrors ancient palaces and church bells cut of lace; its cold waters creep into the very heart of the city through intricate channels, and dark gondolas slide beneath its bridges, the face of the mariner hidden behind a mask, like the bearer of an uncertain omen. Venice’s melancholic beauty is worth dying for, as Death in Venice taught us long ago. But it’s also the romantic destination per se, the perfect shrine everyone will choose to reveal, revive or relish their love. If travel were a religion, there would be no way around a pilgrimage to Venice. People would bear the symbol of their faith (what would it be – a globe, a bird, or maybe a sail?) along dusty roads throughout the world, and their paths would all merge on the banks of that majestic city that loves to be called La Serenissima, just like the Christians go to Rome, the Jews to Jerusalem and the Muslims to Mecca. They would chant hymns celebrating the magic of the world and the short-lived blessings of peace and beauty. Then they would ritually get on one knee and ask their loved one to marry them anew, once, twice and ever again. 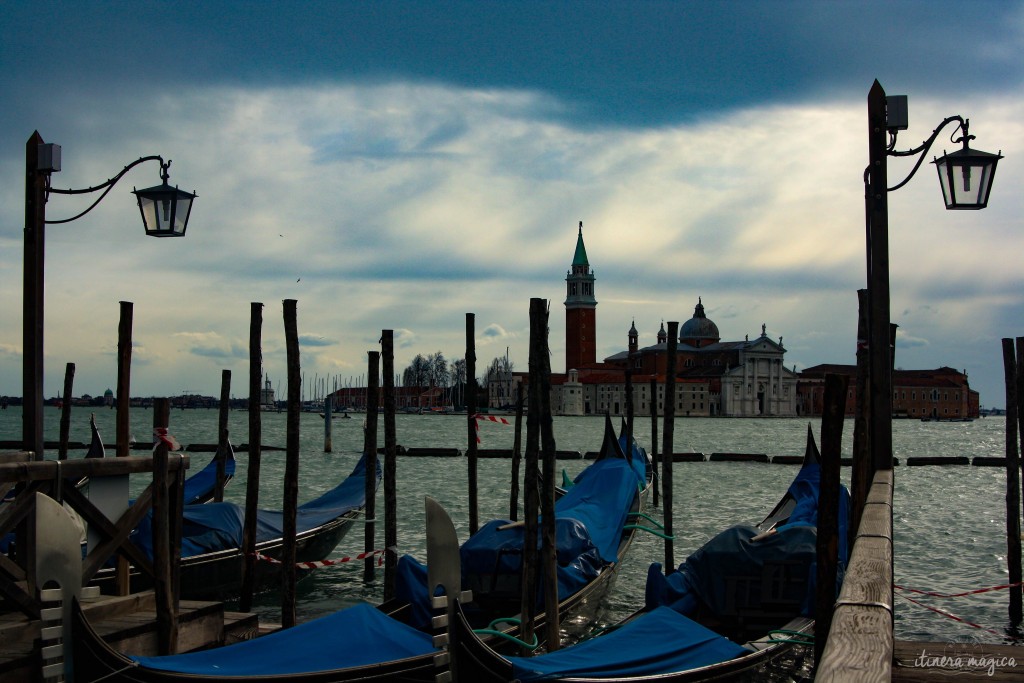 Gondolas in Venice, and San Giorgio Maggiore in the background. 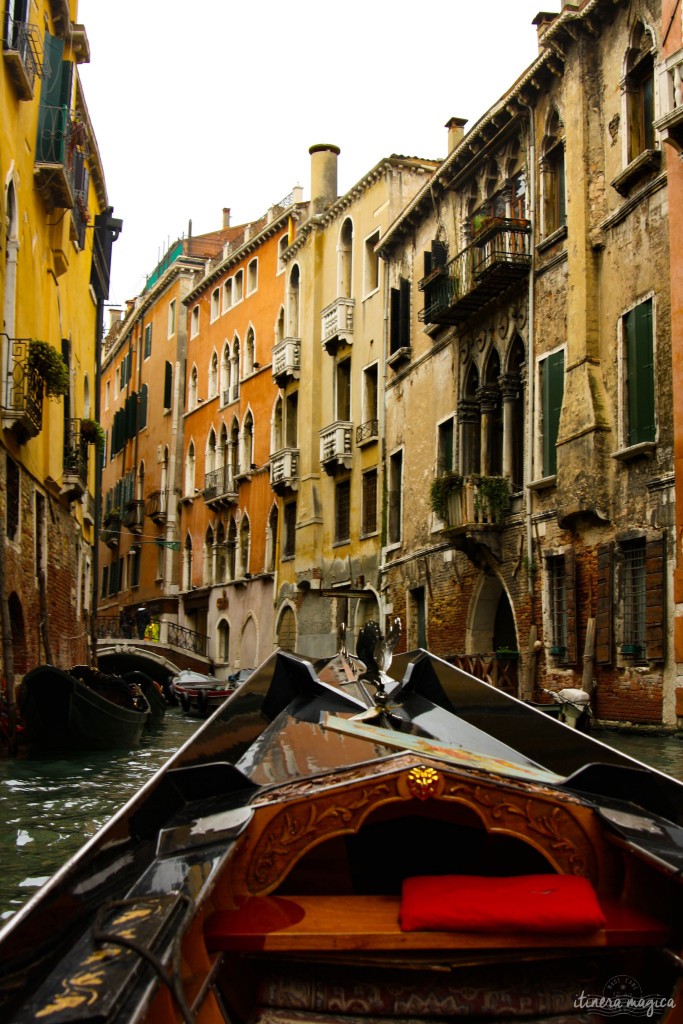 On a gondola in Venice. 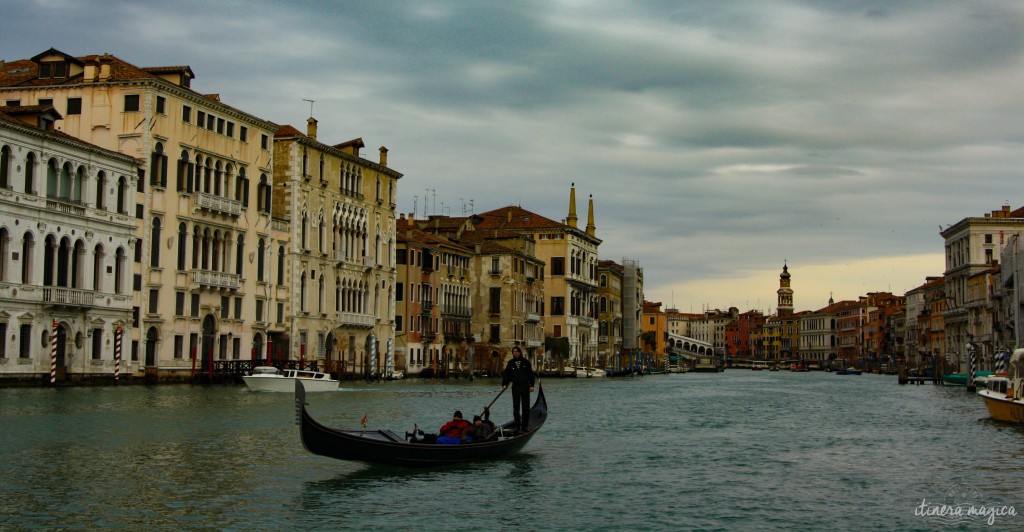 Poetic visions of the Grand Canal.

It’s not just that Venice inspires love. There’s something inherent to Venice’s nature which makes it resemble love. This city is an island, cut from the rest of the world by long stretches of sandy lagoons and glistening water, just like the passionate loneliness of two people who fall in love and discover that they could watch the whole world burn without batting an eye, as long as they’ve got each other. Lovers build a city in the sea – and then time slowly attacks it. Venice stands on marshy, crumbling ground, and the piles on which it rests are slowly sinking into the cold water. Just like love, Venice is being devoured from within, waging a never-ending war against erosion, corrosion and self-destruction. Everything that makes it special, that makes it stand out, could turn out to be its very doom. There’s a poignant urgency to Venice, just like to passion. Hurry up, go and see Venice, cherish it, tell her you love her, for she might be gone tomorrow. Her heart is shaped of Murano glass, it’s a prism which gives more dramatic and solemn colors to life, but how easily it could burst! A word, a harsh move, and you might find it in pieces. Sweet sad music clings to every corner and every image, for unlike many cities which seem to be built for eternity, Venice has the solemn splendor of things mortal. The acqua alta flooding Saint Marc’s piazza rises every year even higher, when will Venice turn into a new lost Atlantis? Remember what John Keats said of melancholy: she dwells with beauty – beauty that must die. On Keats’ grave in Rome, the following words are engraved: “Here lies one whose name was writ in water.” Another graceful, tragic name was writ in water: Venice. 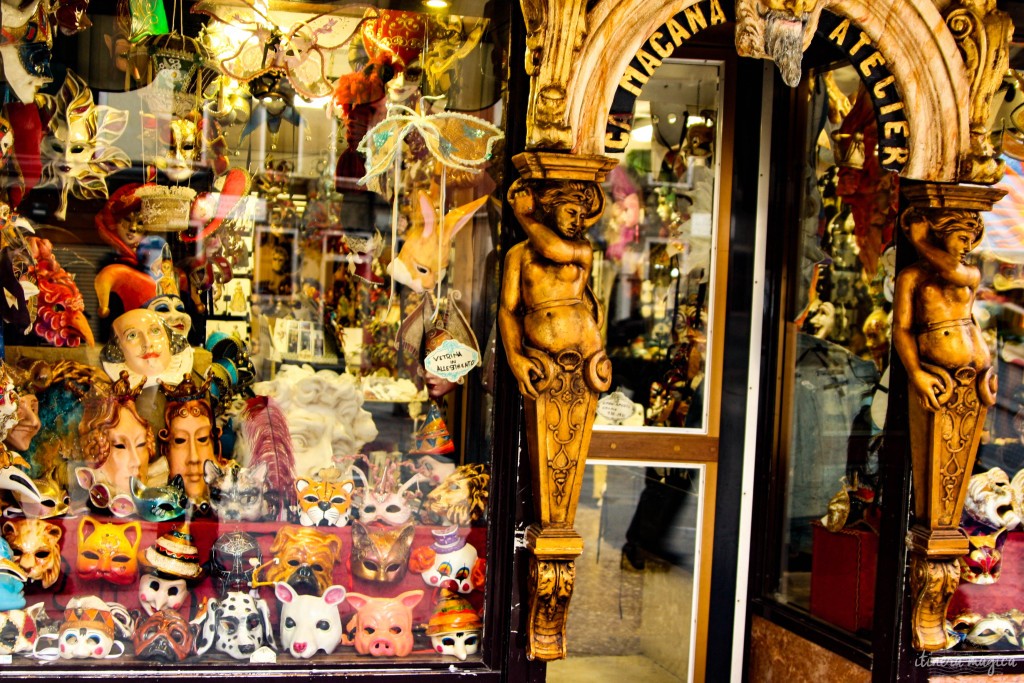 Masks and tricks in Venice. 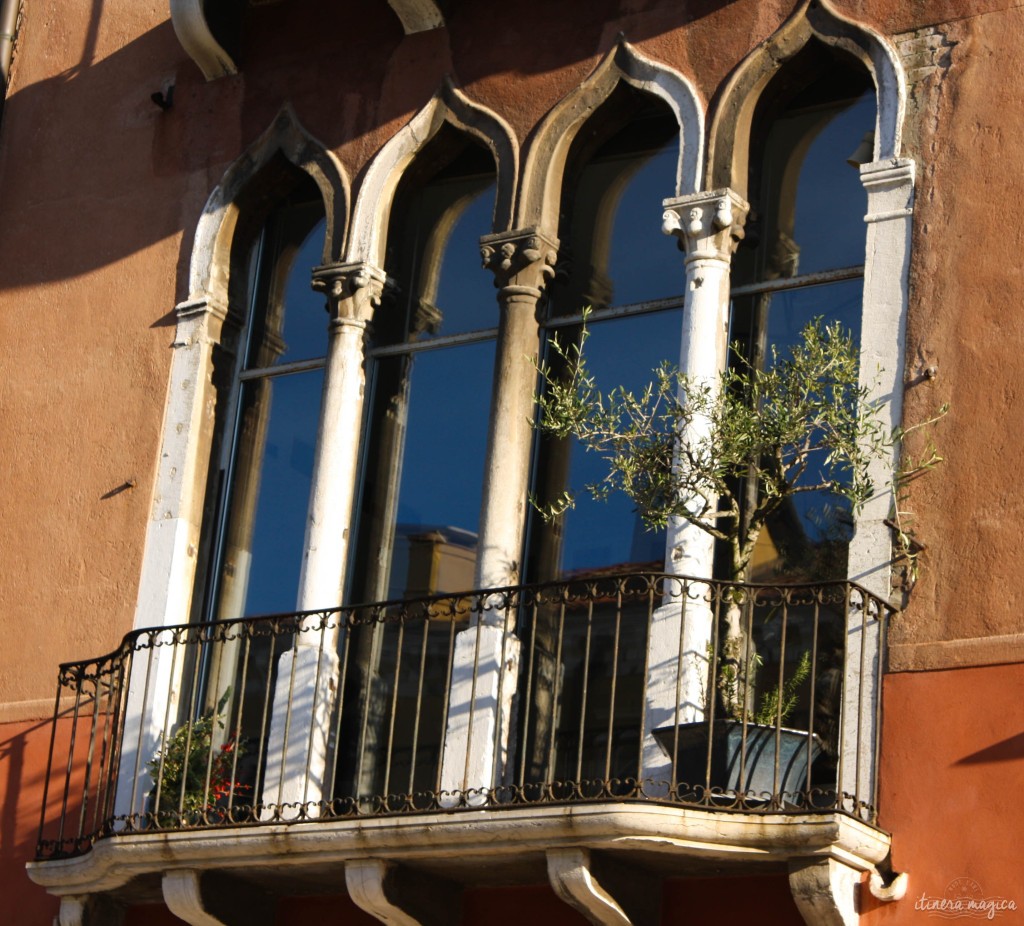 An olive tree on a balcony. 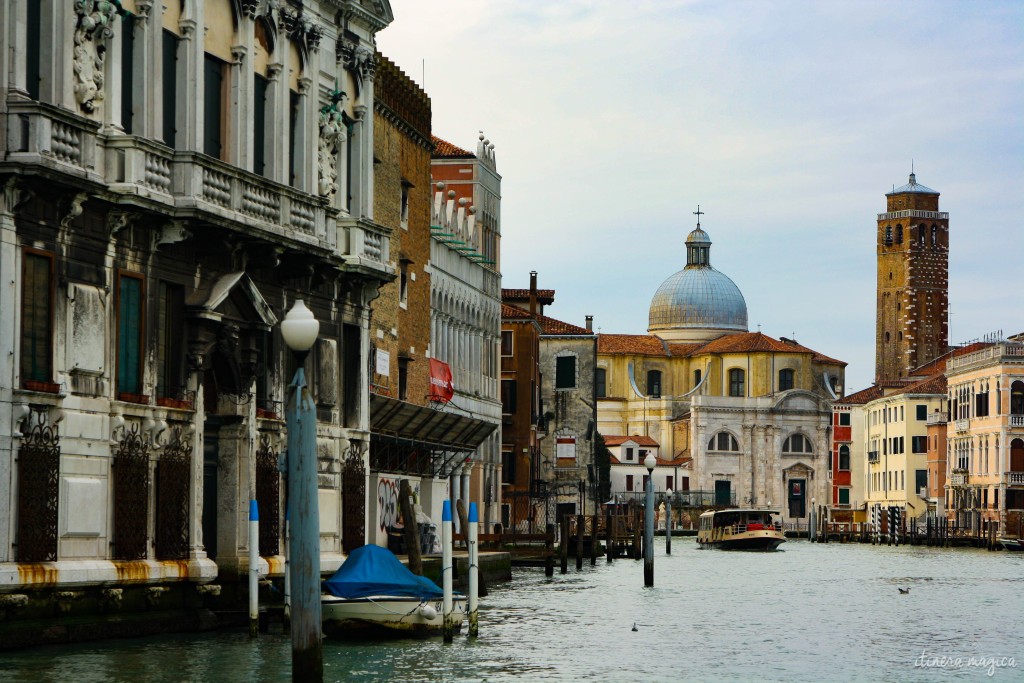 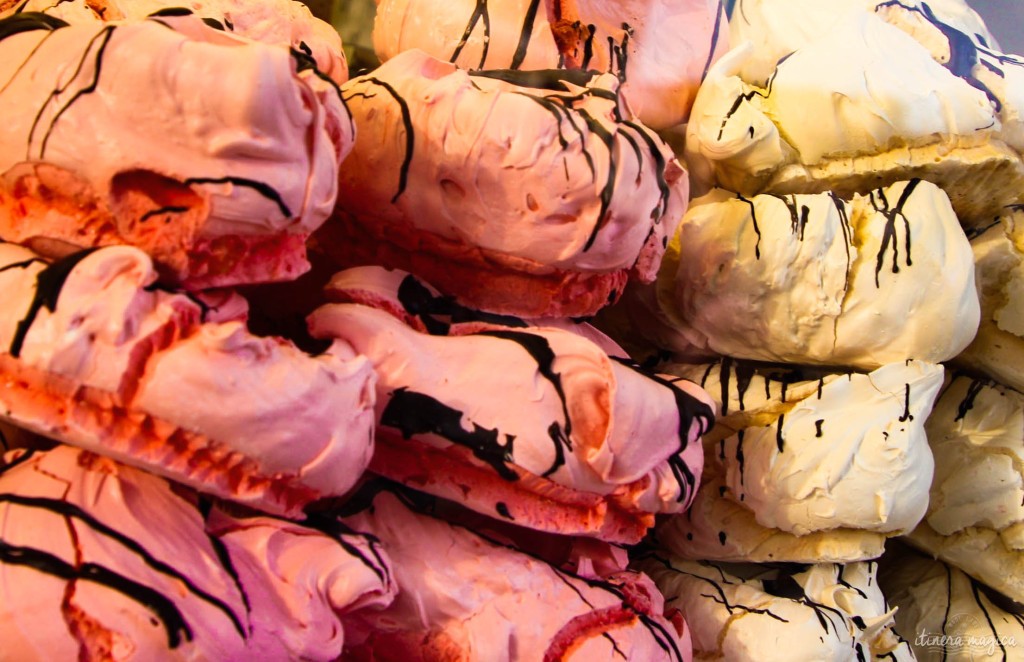 We went to Venice in the heart of winter, in windy and bleak January, when Christmas’ lights are out and the carnival hasn’t started yet, when tourists are so scarce that bored and chilled to the bone gondoliers would practically pay you to take a ride with them. We were living in Munich at that time, so we flew over the snowy Alps to reach the Italian shores – we found in Venice the very same silhouettes that were the background to our lives in Munich, those distant high peaks shrouded in white mystery. It felt like playing hopscotch over mountains. Our love was molded in sublime landscapes, which made us feel unique. The light was pearly and oh so filmic. We had Venice all to ourselves, and in spite of the cold and the biting wind, it restored its novelty. We were the first lovers in Venice ever. 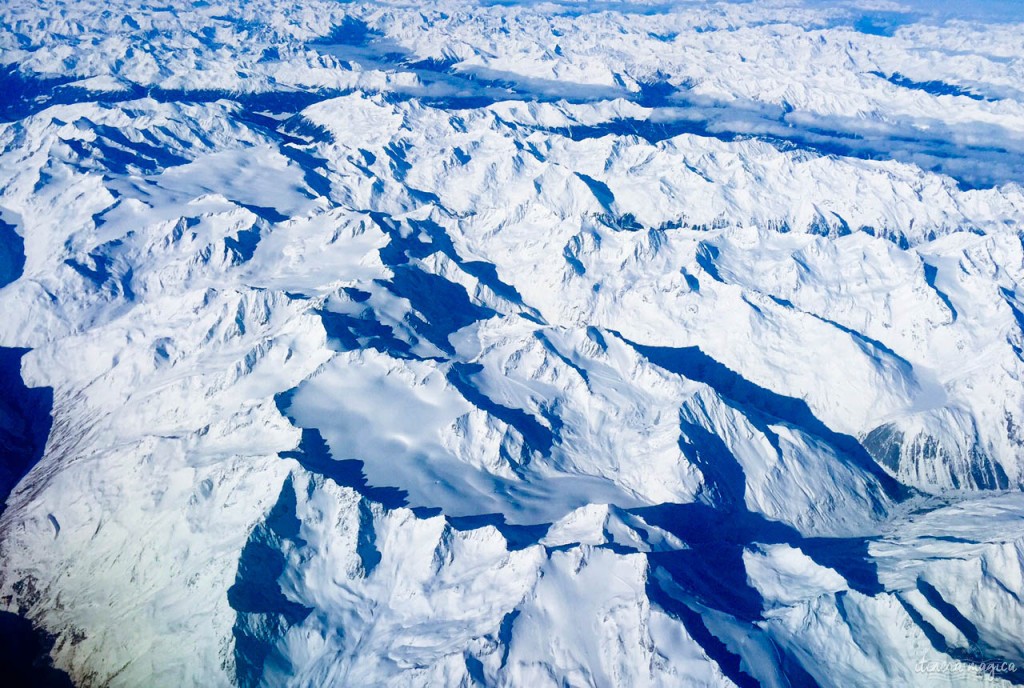 Flying over the Alps, from Munich to Venice. 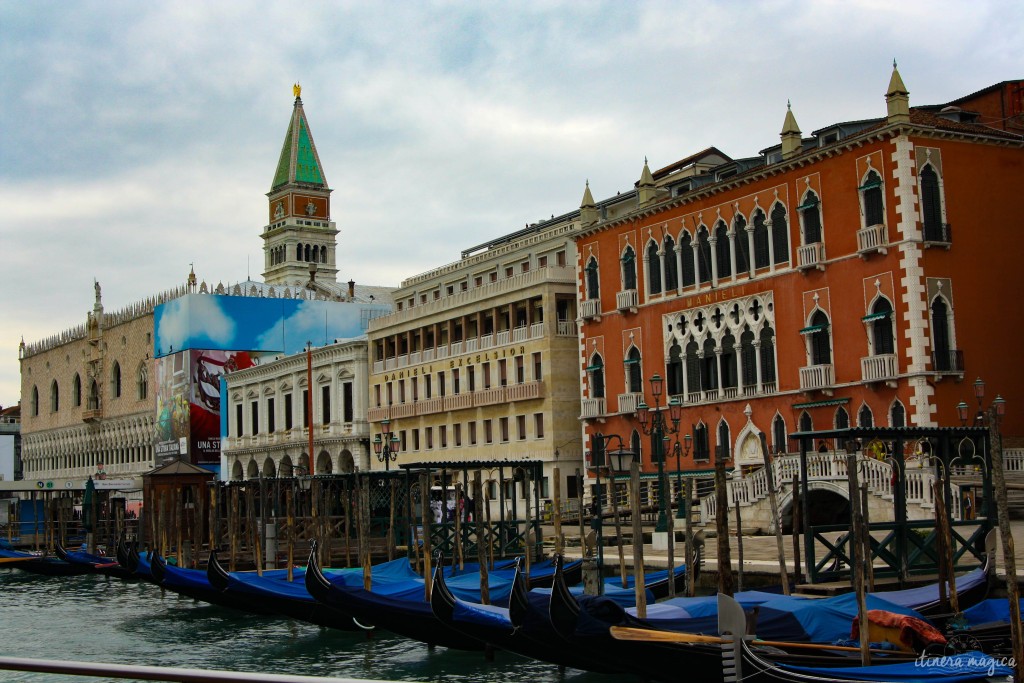 I could tell you of Venice’s dazzling history. I could tell you of its key position at a crossroads between East and West, of its significance as a gate between two worlds that constantly fought, feared and fascinated each other. Byzantine domes and golden mosaics in Saint Marc’s basilica tell of the lingering influence of Constantinople, and the massive bronze horses tell of its ransacking in 1204 – in those times when Christians attacked other Christians, the horses were stolen from Constantinople, and brought back to Venice. Then another enemy emerged, the Ottoman Empire, and when it was defeated at the greatest naval battle of all times, the battle of Lepanto in 1571, the victorious Republic of Venice appeared mightier than ever: the gracious bow of triumphant Christianity. But shadows crept in its glow. Venice was (and still is) a mysterious city living behind closed doors, ruled by the assembly of doges. Their life-long power came with a frightening price: nobody’s life was less free, more controlled and restricted than the doges’. Their own servants watched their every move; everyone spied on everybody else, in a spiral of dark power feeding itself on suspicion and unrest. True sovereignty wasn’t in any man’s hands: it remained within the claws of the city itself, this fierce lion which devoured its highest subjects. No wonder Venice became famous for its carnival, this dazzling whirlwind of make-believe – life was a masquerade. Friedrich Schiller and many other great European writers told of Venice’s dark mysteries, of sharp blades gleaming in the shadow, of secret doorways and slow poisons. 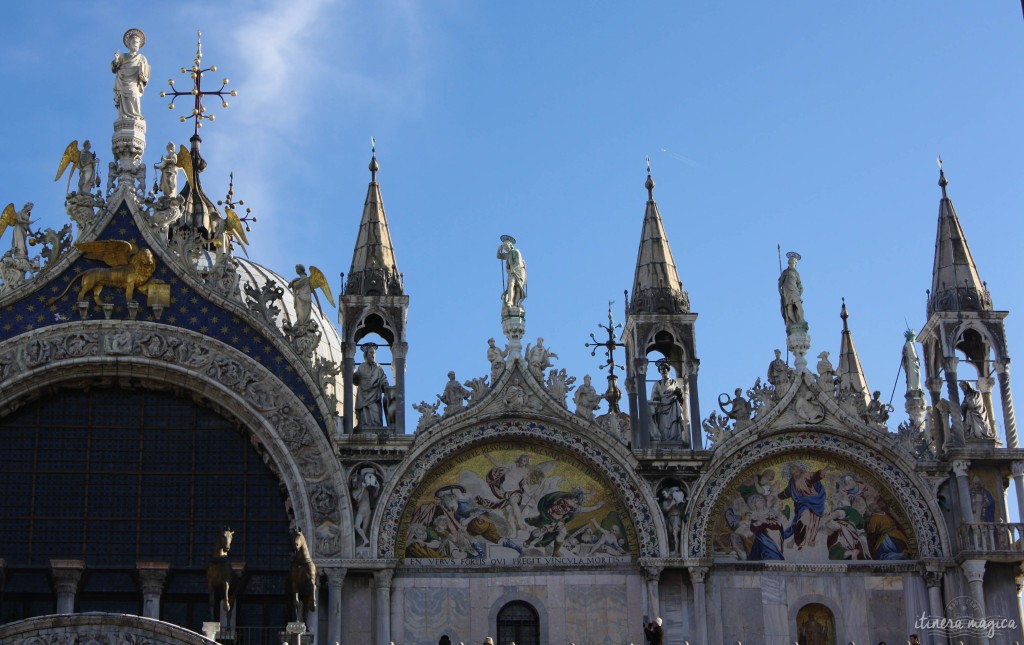 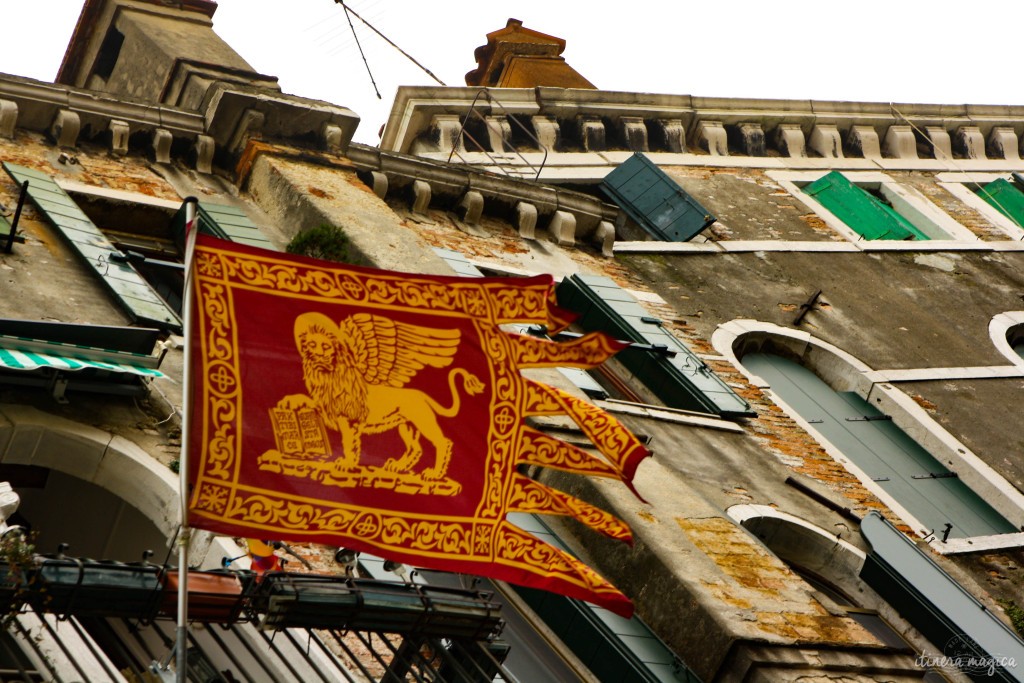 Flag of the Republic of Venice, bearing the lion. 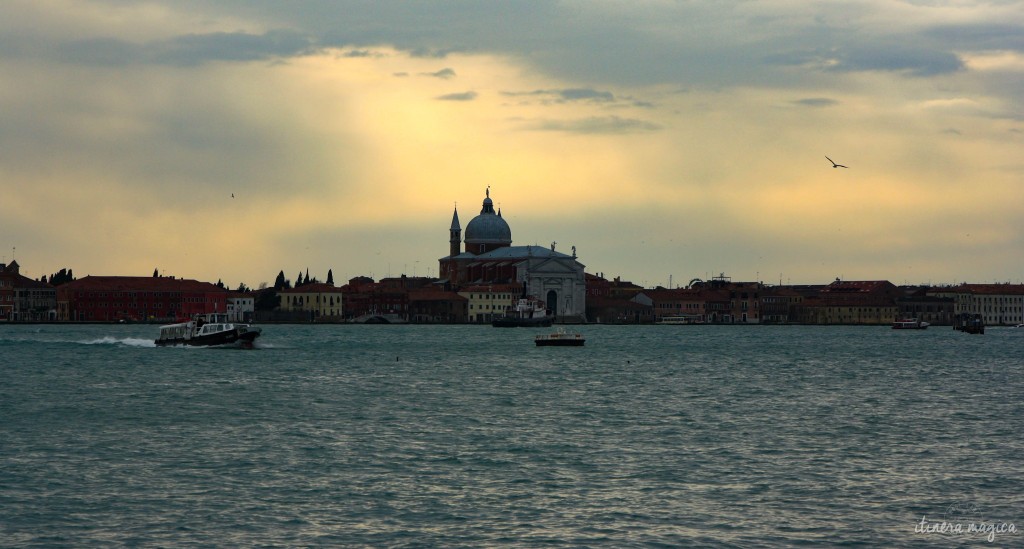 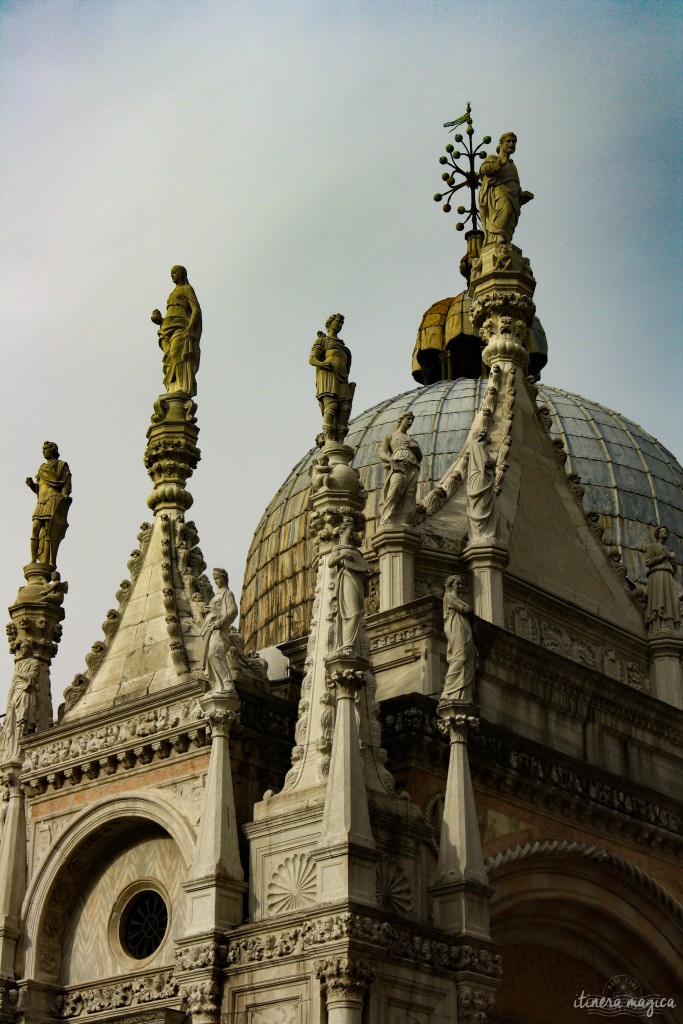 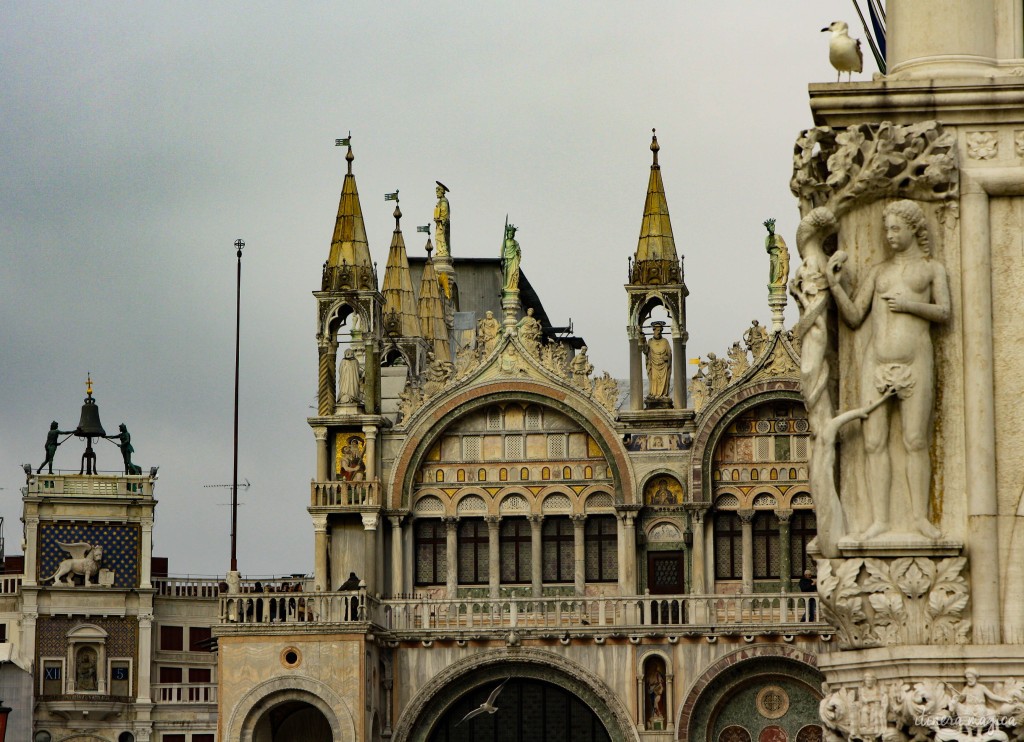 I could also tell you of the end of the Republic of Venice. After a thousand years of freedom, Venice succumbed to France’s army lead by Napoleon Bonaparte in 1797, and was annexed by the Austro-Hungarian Empire –  a Middle-European hybrid which dreamt of this mythical outlet to the sea. On the island of San Michele, which is Venice’s graveyard, the tombs tell the story of Austrian soldiers and civil servants born in Vienna and dying in Venice, of southbound destinies and of empire fantasies. With its dark cypresses, San Michele looks just like Arnold Böcklin’s Island of the dead. Imagine an island entirely covered in graves, with shifting, sandy ground disjointing the vaults and tilting the crosses – anytime, the boggy soil might just spit out the dead. It’s a haunting place, with only a few living souls: dark clothed monks in an ancient monastery, ringing bells and chanting prayers among the sea of corpses.

Venice’s graveyard, San Michele, with its dark cypresses reminding me of Böcklin’s Island of the dead. 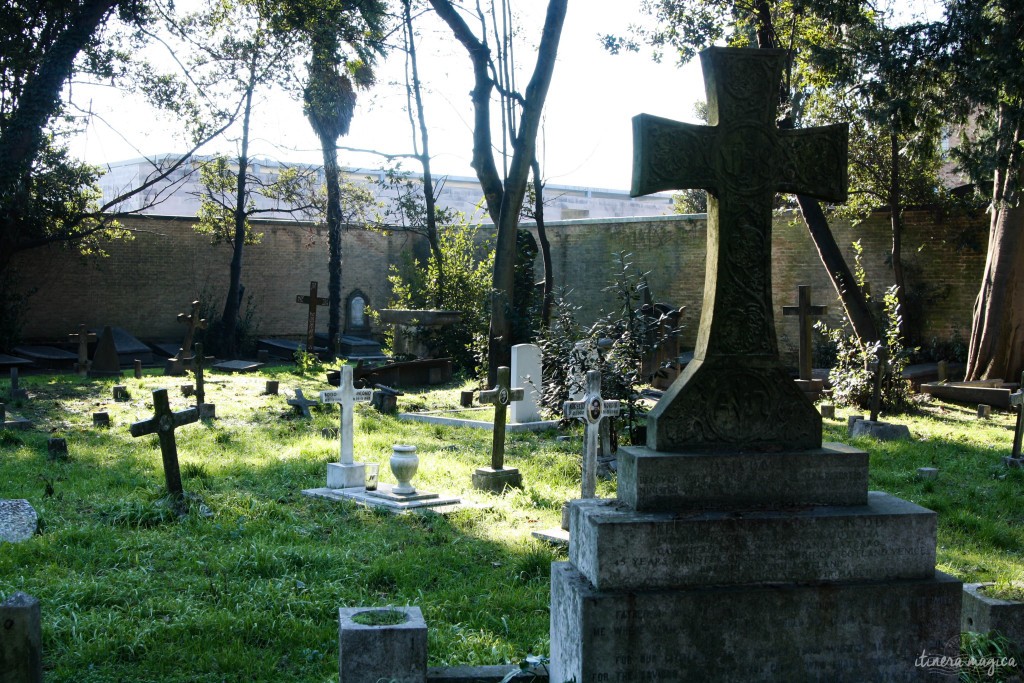 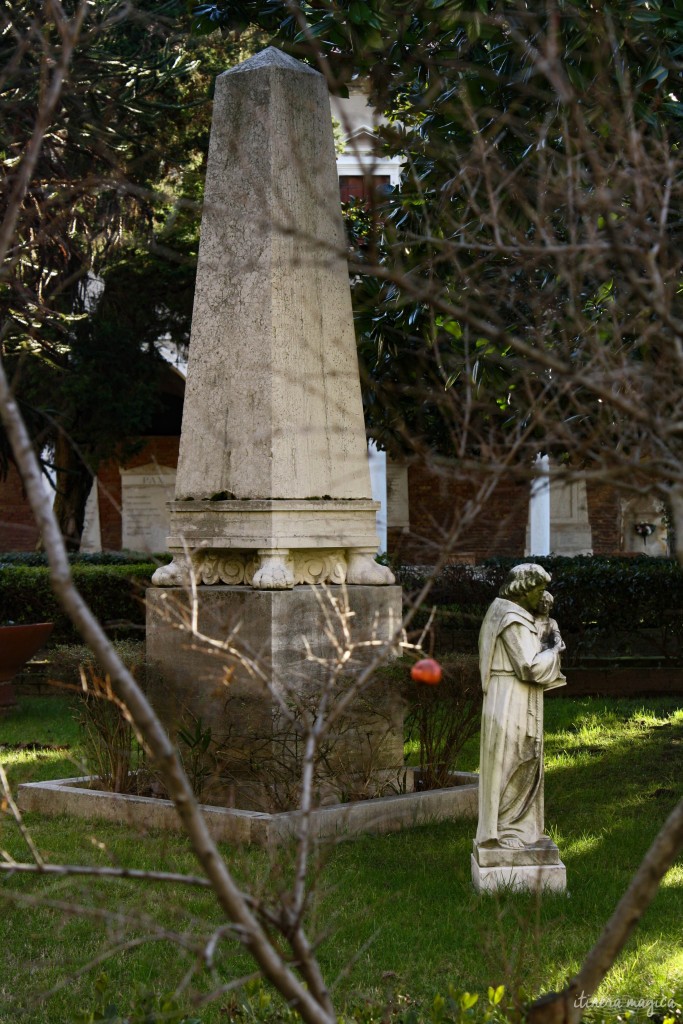 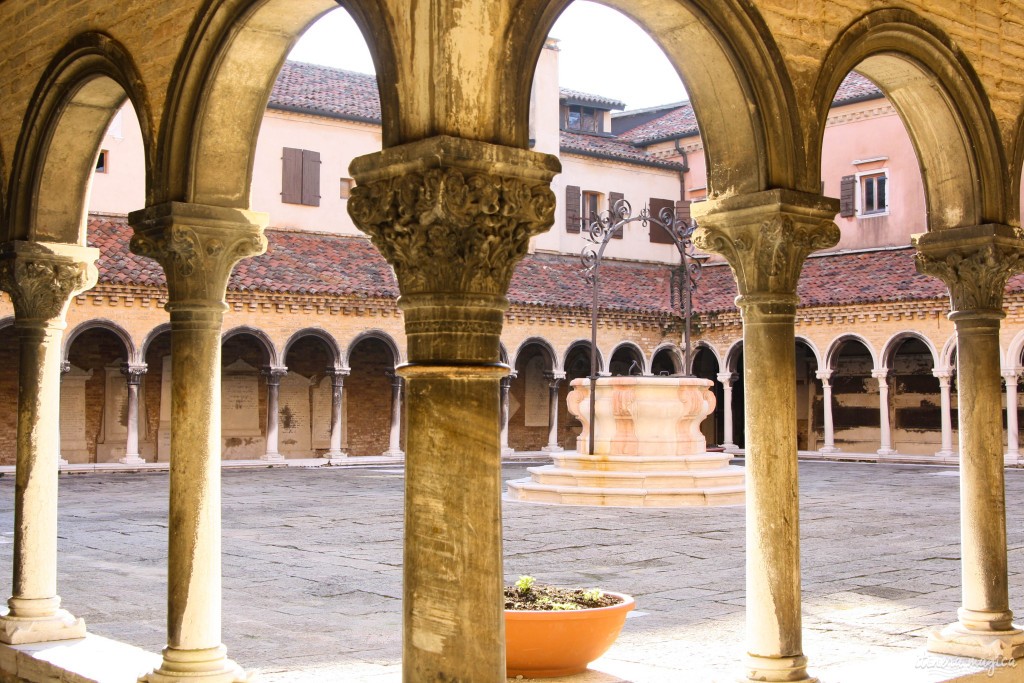 But here’s the truth: my memories of Venice are strangely blur and imprecise. Why? Because I didn’t write. Since I was eight years old, I’ve been keeping a travel diary of every trip I took, and I still have them all, notebooks heavy with ink, postcards, dried flowers, little shells I taped to the page, entrance tickets to museums and boarding passes. I got used to transferring my thoughts to paper, to empty my head of memories to preserve their precise and objective form in writing. But in Venice, I didn’t write a single word, I was too busy living and loving. We visited the Palazzo Ducale and I forgot, we experienced the illumination of art ever present, everywhere in Venice, we entered churches and stumbled upon a masterpiece by Tintoretto, and I forgot. I remember only the most vivid, fleeting things. The colors of the streets in Murano, boaters floating on this sea of colors patched by the many reflections. Kisses in the cold wind, the light, the light, dramatic, cinematic light. The view at the top of San Giorgio Maggiore – Venice resting on a sea of iron, jeering seagulls whirling around the high tower. Delicious meals eaten by the Grand Canal. I bought a true Venetian mask of papier-mâché and feathers, with alabaster skin and feline eyes, which made me so much more beautiful than I was. I dreamt of staying until carnival came to be part of the masquerade. Venice was blurred by tears and sparks in my eyes – the cold, and the promises. Maybe this is what Venice is meant to be: the scenery to your own tale.

Venice as seen from the top of San Giorgio Maggiore’s bell tower. 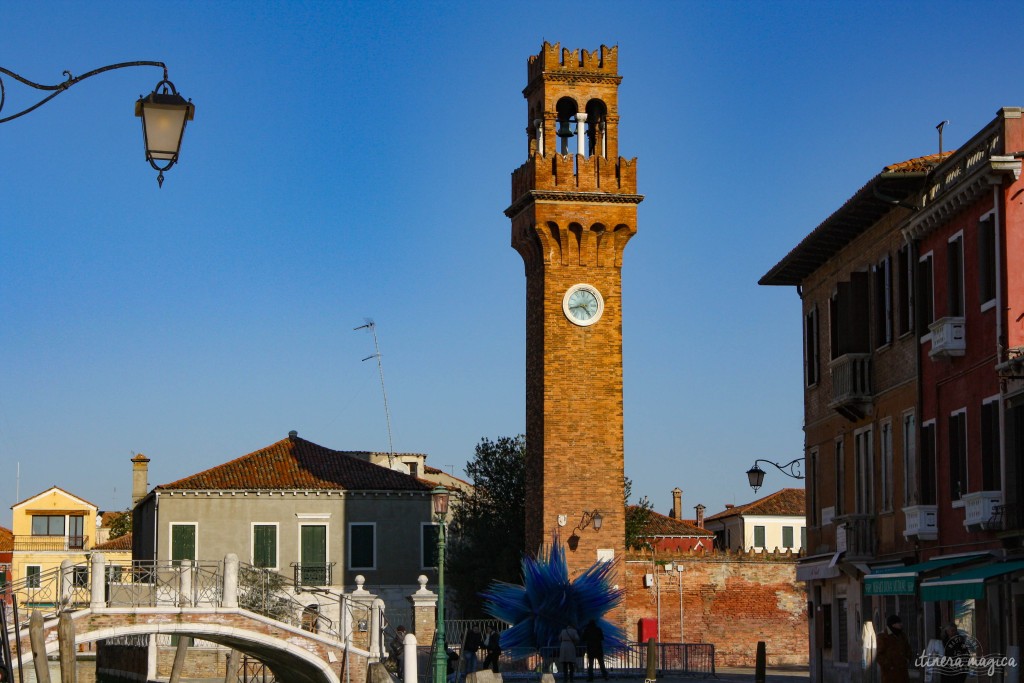 A glass flower in Murano. 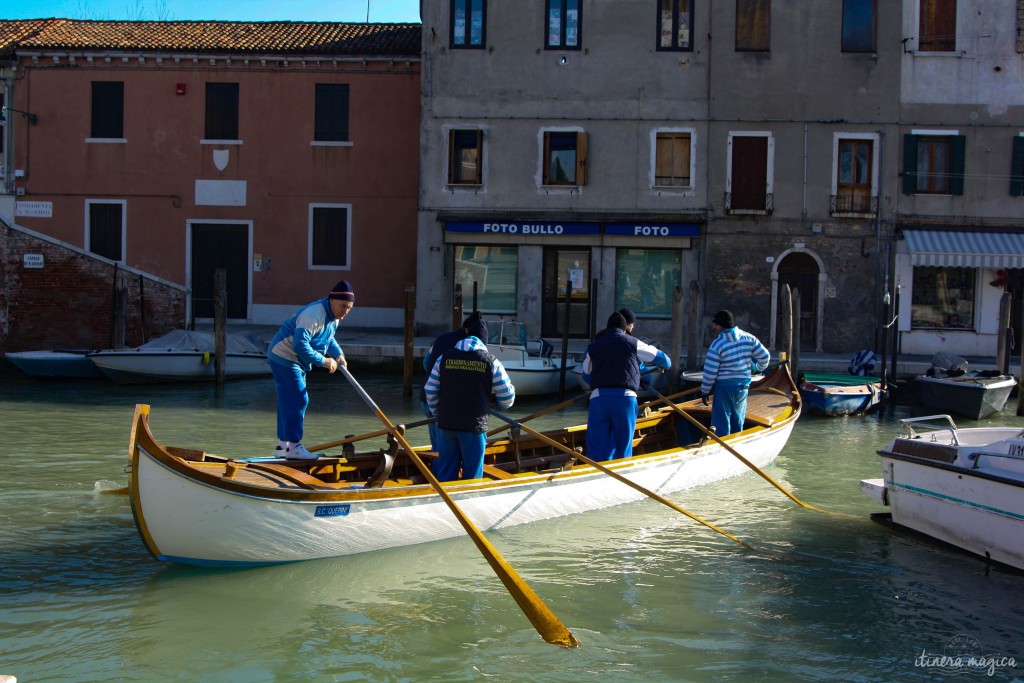 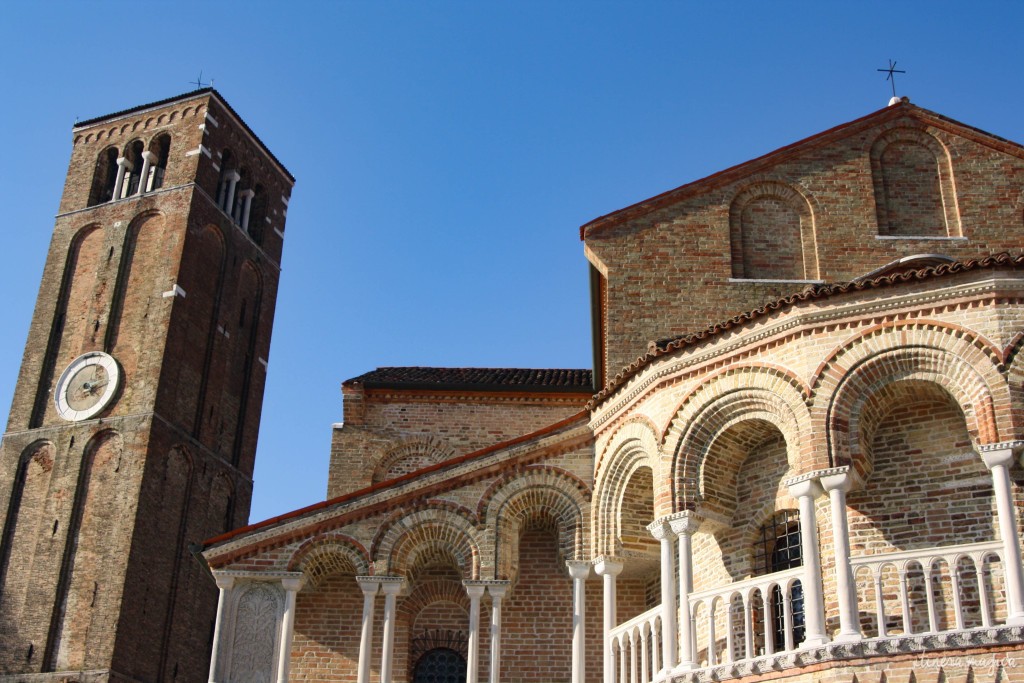 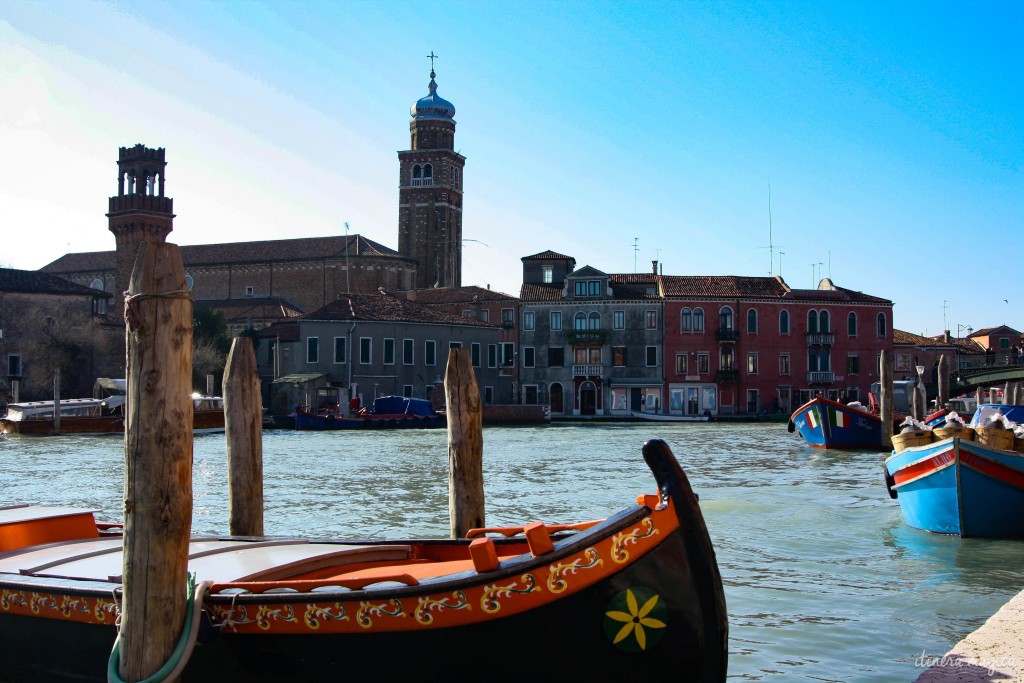 If I were to found a new religion of travel (who doesn’t dream of being a prophet?), I would require a visit to hackneyed and touristy destinations in the heart of winter. Loneliness and new eyes reenchant the world. Or maybe it’s just the drunken foolishness of young love. Go to Venice at those crystalline times when she belongs to you and you only. You won’t ever forget. 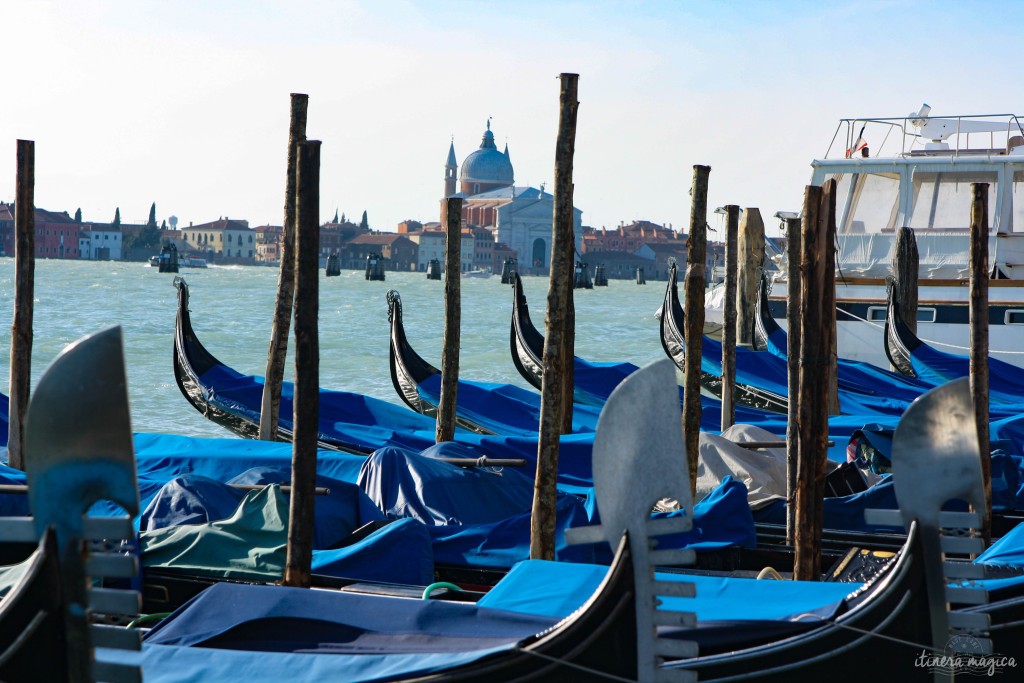 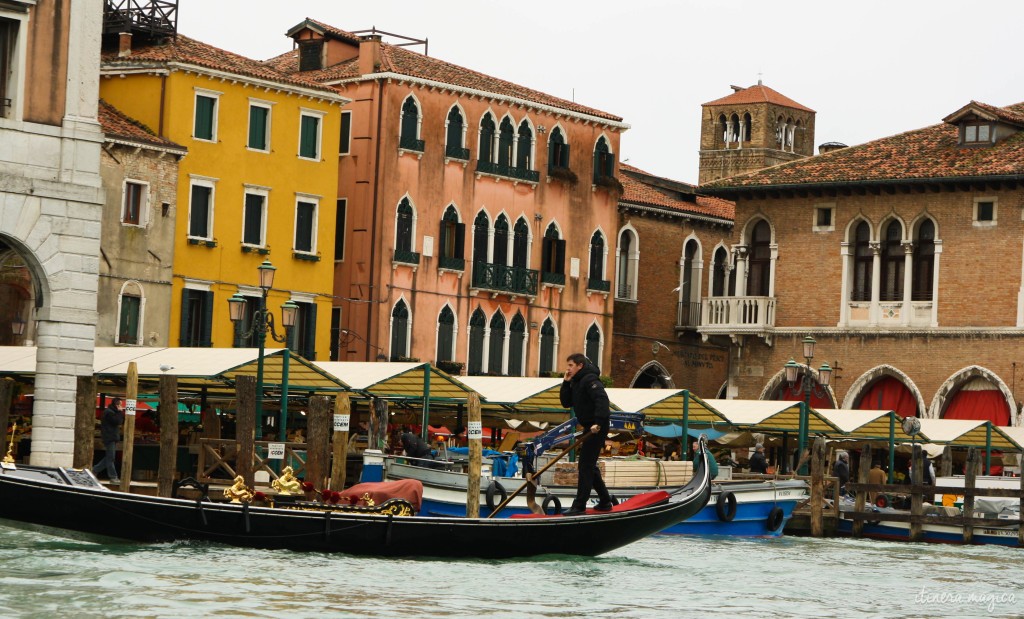 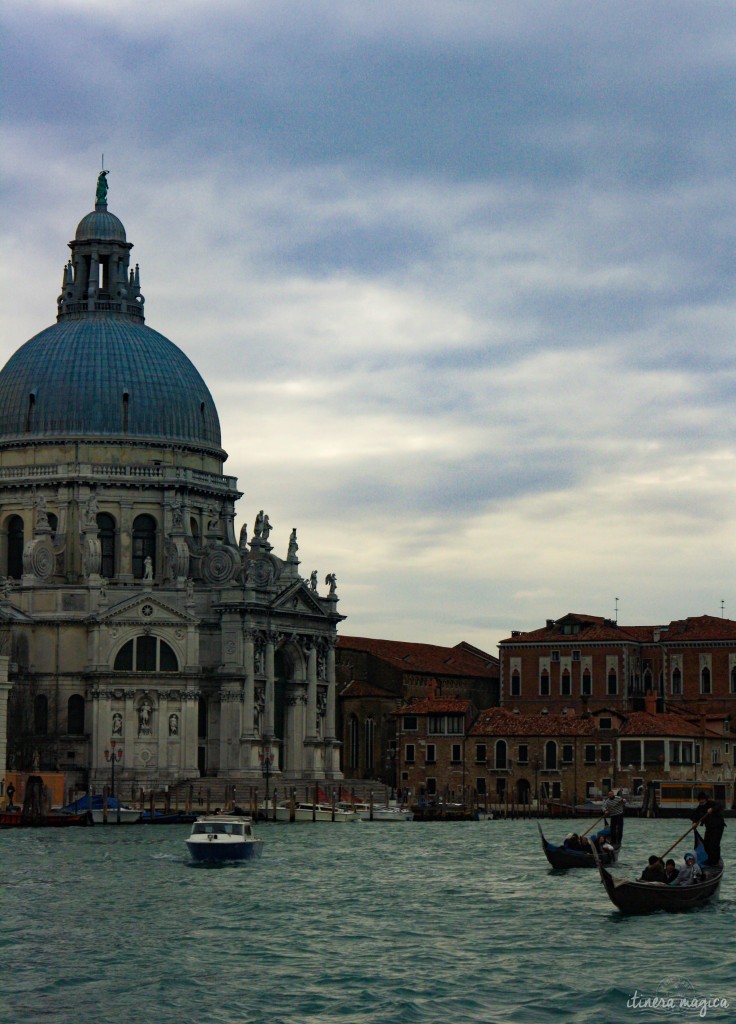 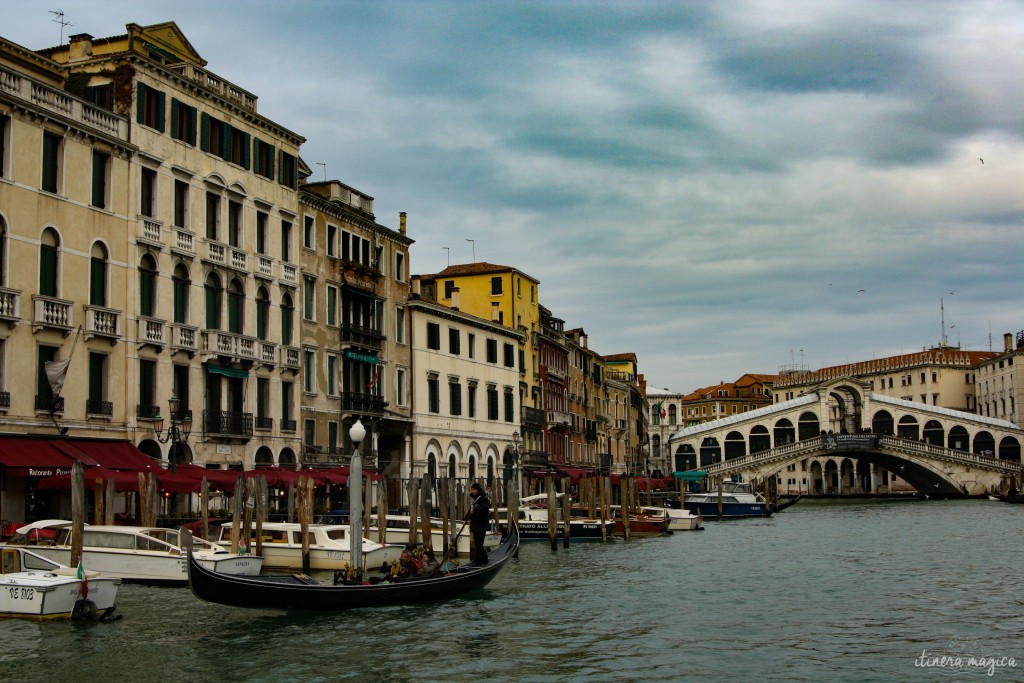 Rialto Bridge, one of Venice’s most iconic spots. 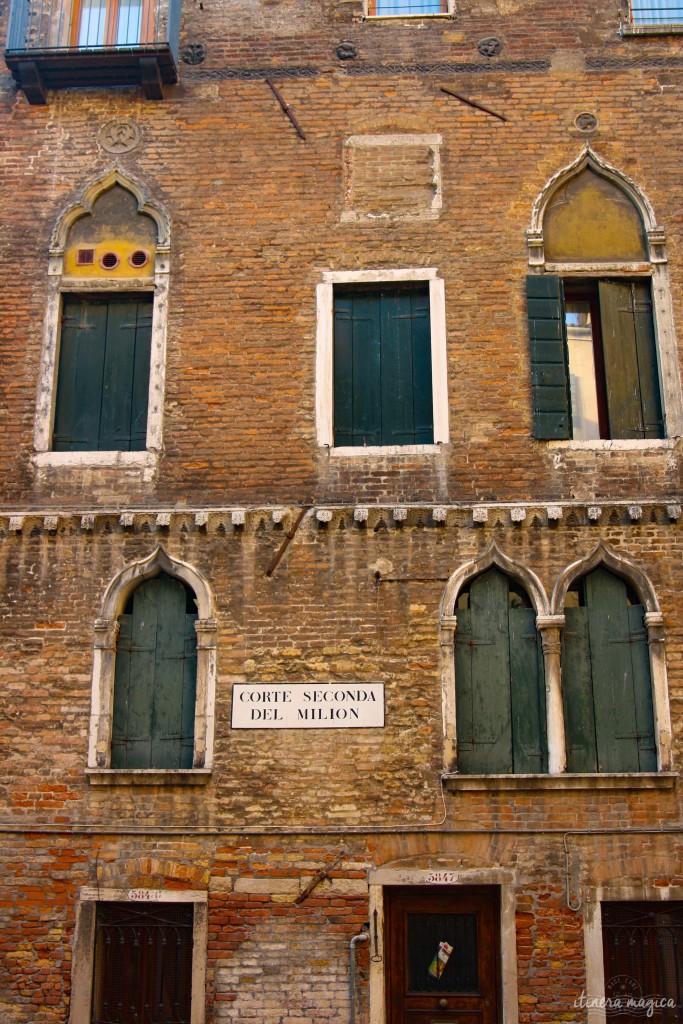 Marco Polo’s house in Venice – in my religion of travel, he would be a God. 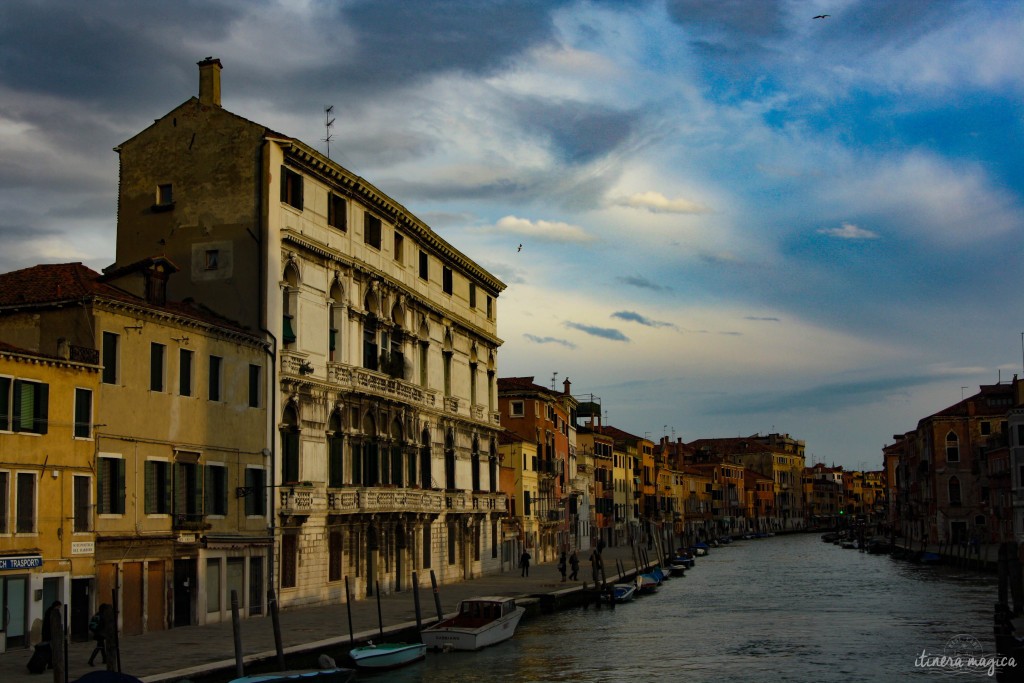 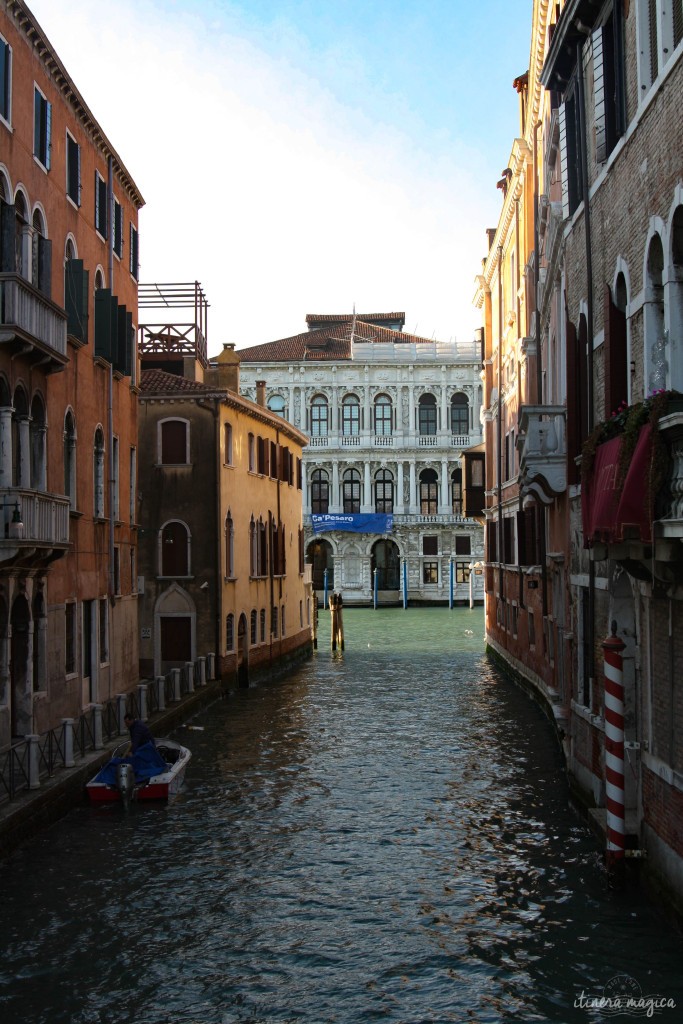 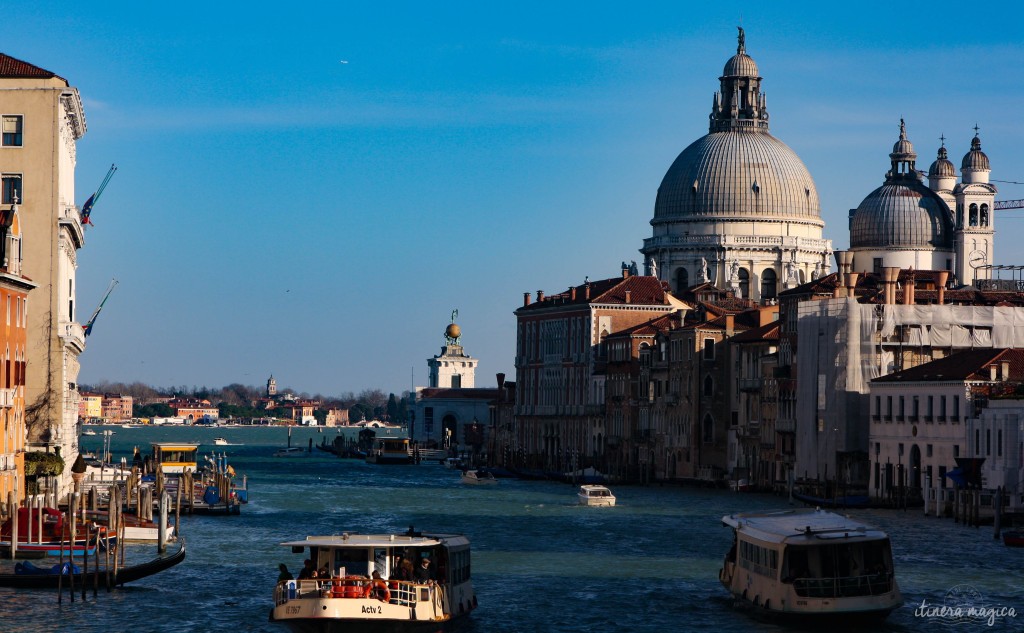 If you’re looking for a more precise Venice itinerary for 2 days, follow the footpaths of my blogger friends.