Nazaré, Portugal: for surfers and big wave lovers, this little town north of Lisbon has become a true legend. Imagine a moving skyscraper, imagine an ancient giant brought back to life by some sorceress’s spell, imagine monsters rushing from the deep to explode at the surface in gigantic bursts of white foam. Waves in Nazaré hold all records. The biggest wave ever surfed was a 111 feet (34 meters) wave ridden by Garret McNamara here in Nazaré. 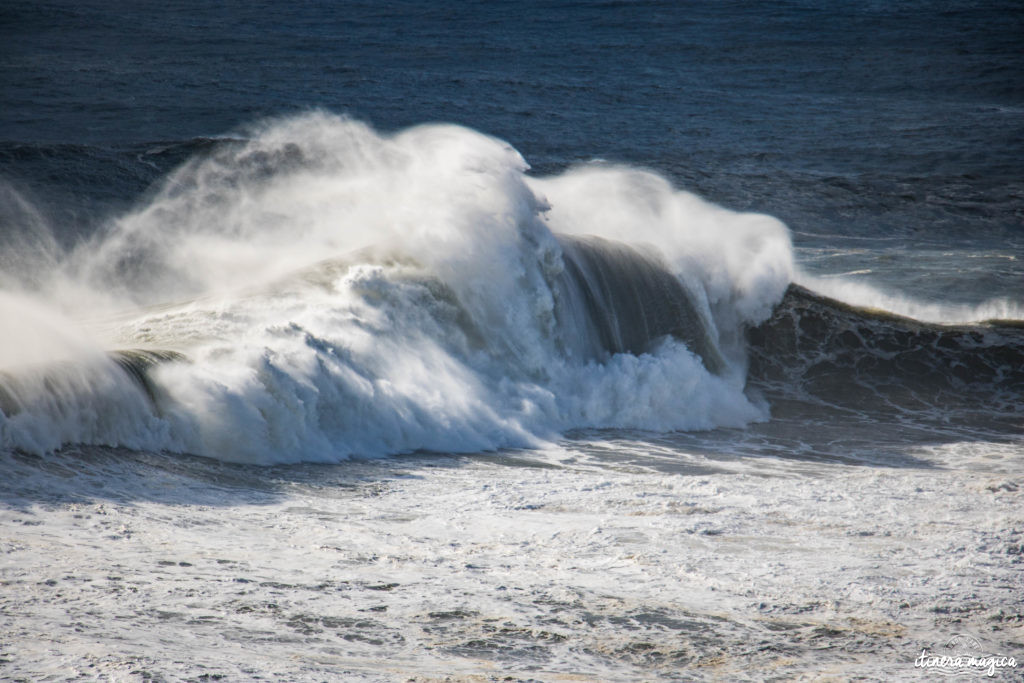 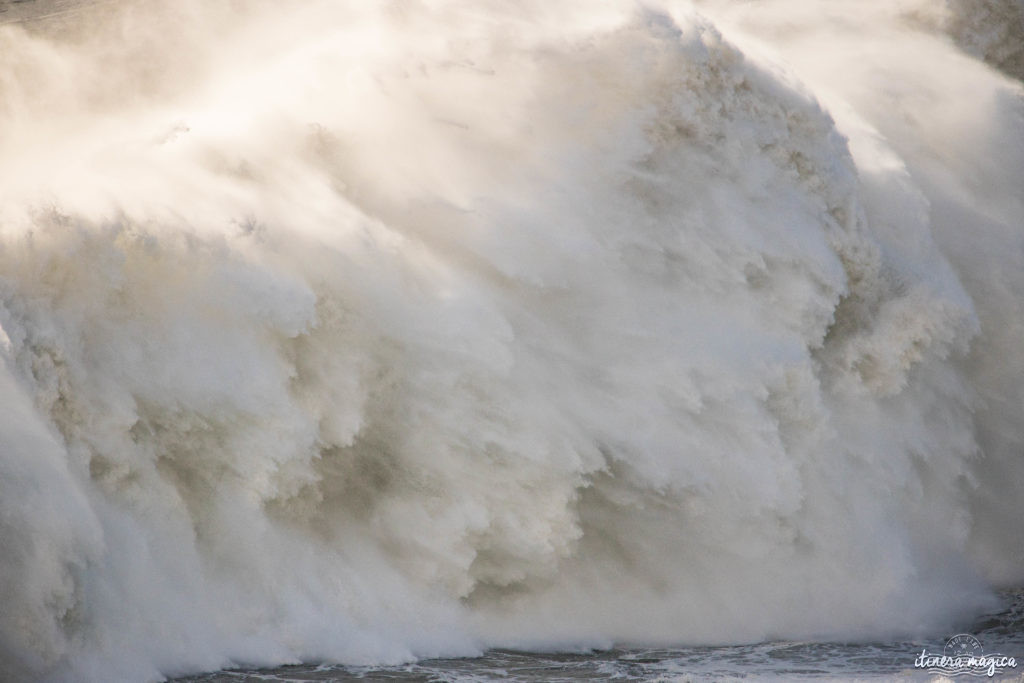 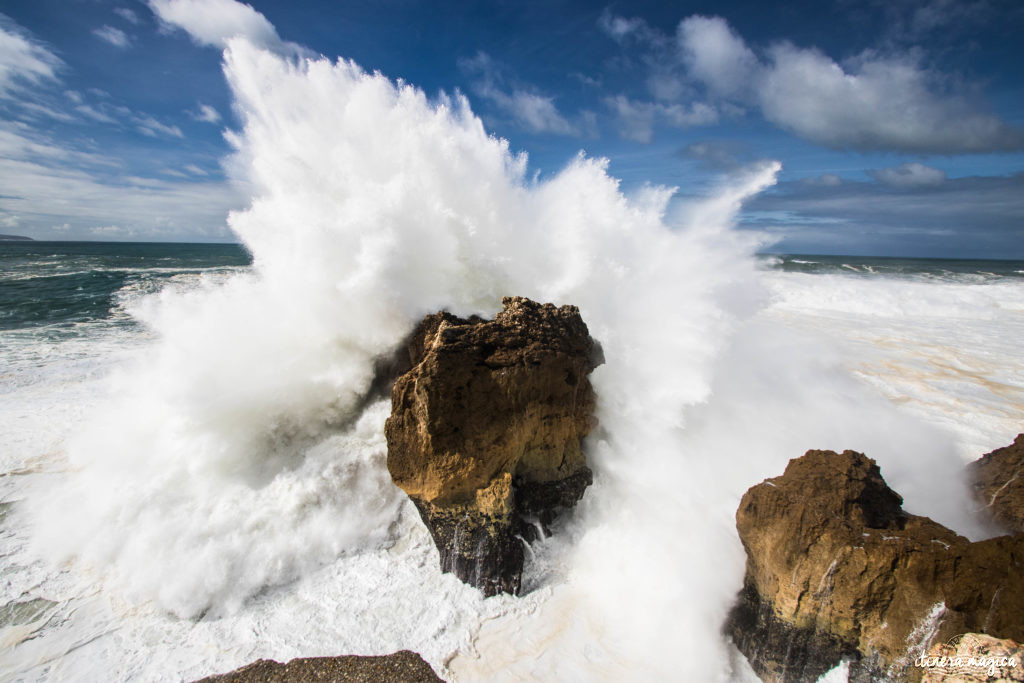 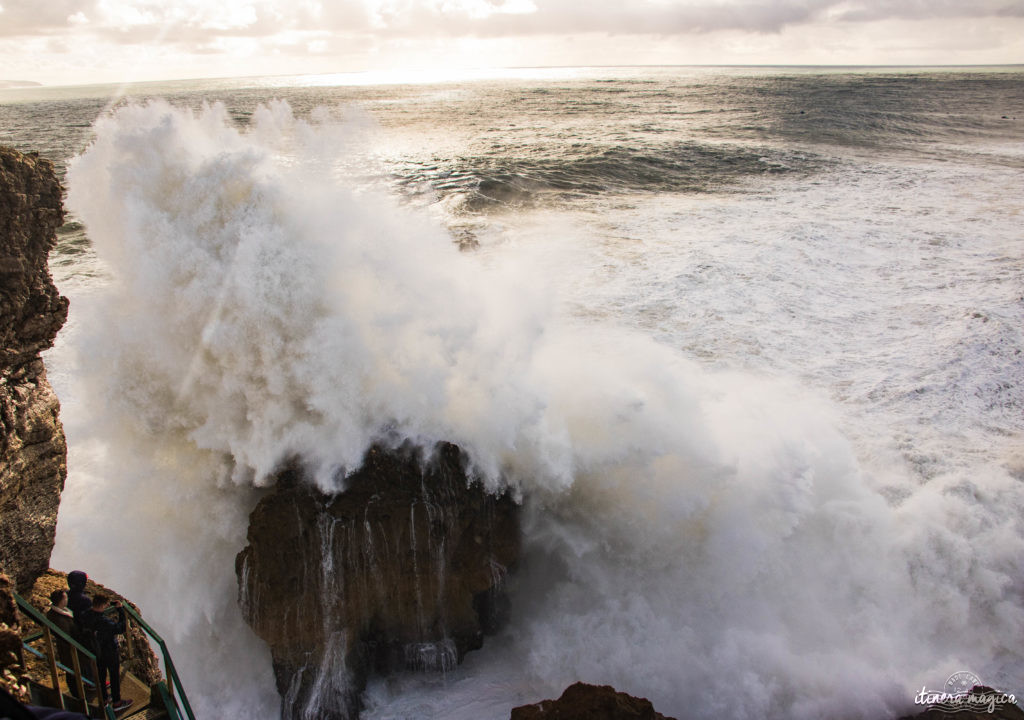 In an older blog post, I told you about my endless love for waves, and especially the biggest ones: gnarly monsters, freak waves, a sailor’s nightmare made flesh and foam. I fell in love with big waves when I was 7, and have dreamt of them ever since. Seeing 100 feet waves was my ultimate travel fantasy and fulfilled my dearest dream. I am still shaking when I think of what I saw last Tuesday, February 28. A storm off the tip of Greenland descended down North Atlantic and unleashed monsters on Portugal’s coastline. Nazaré is the place where they will rise in full majesty. 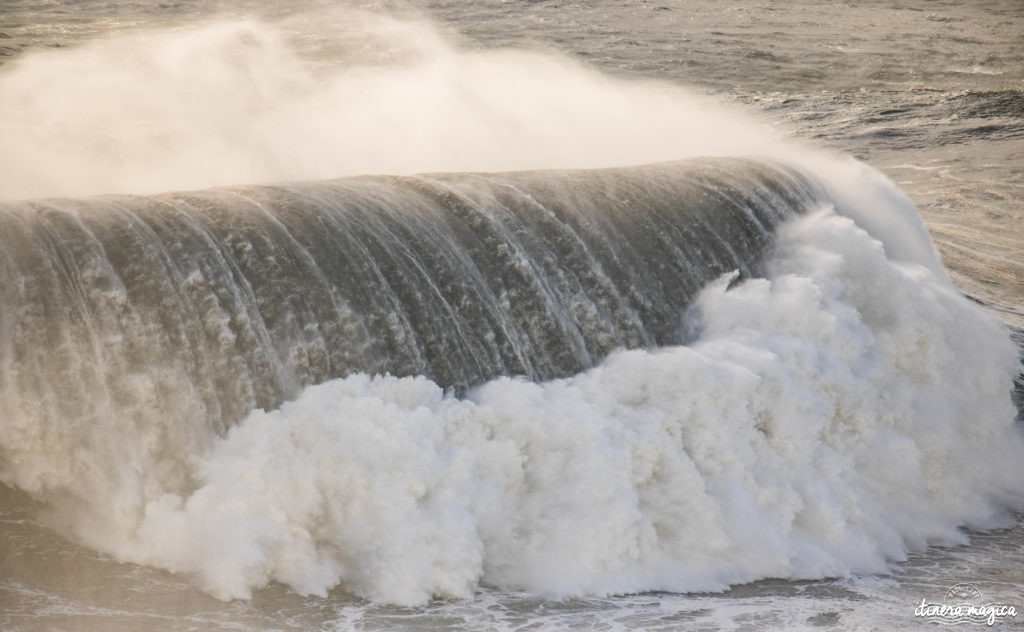 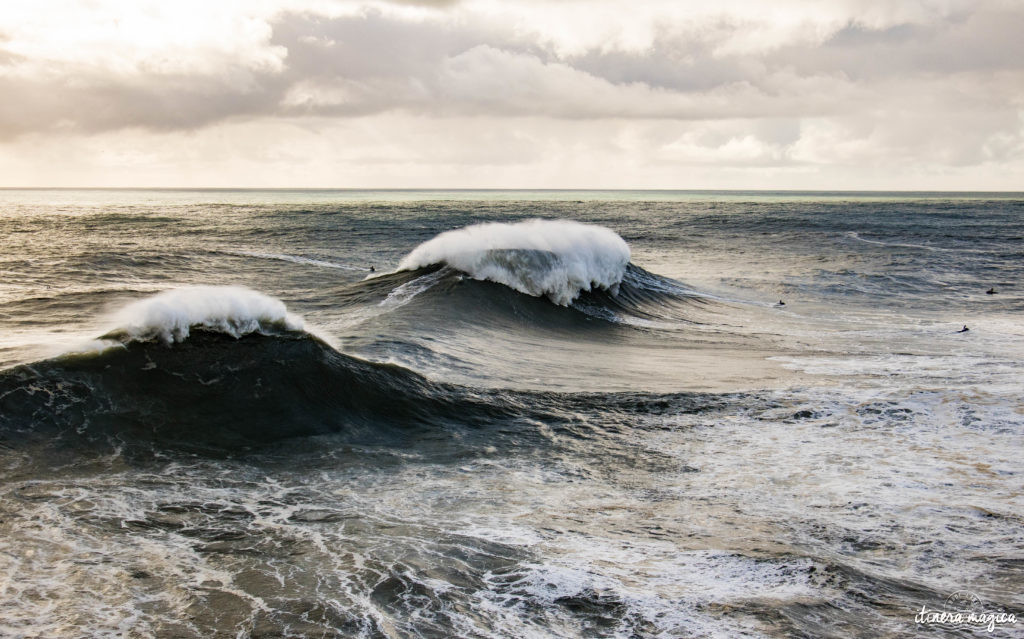 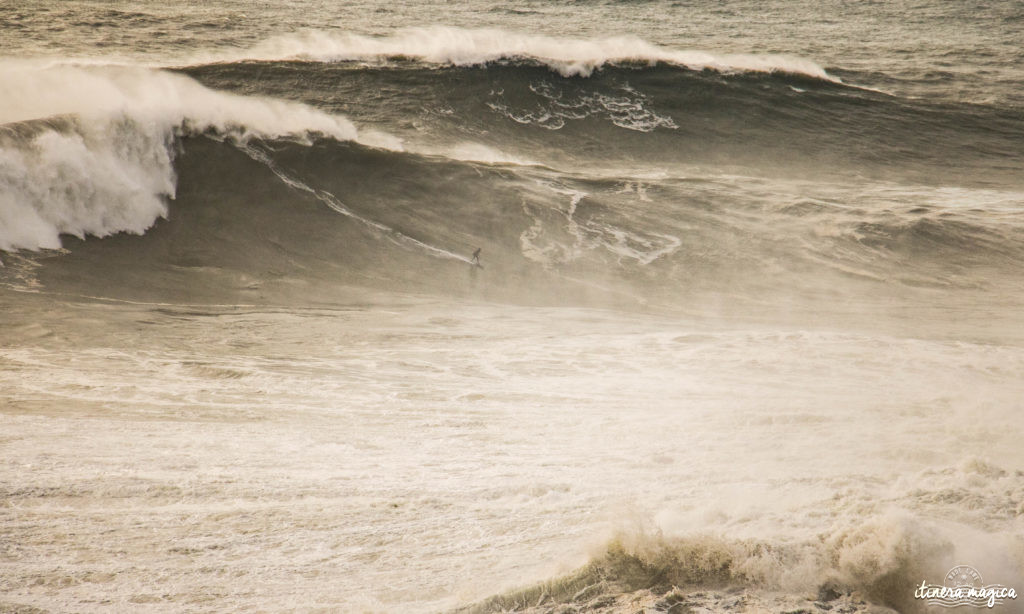 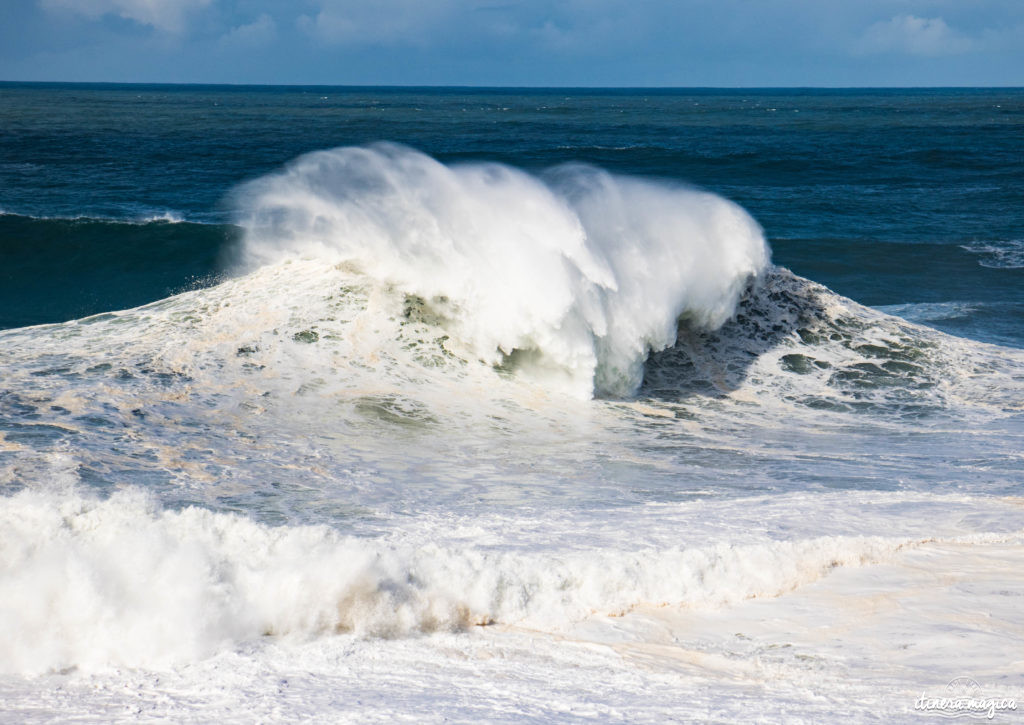 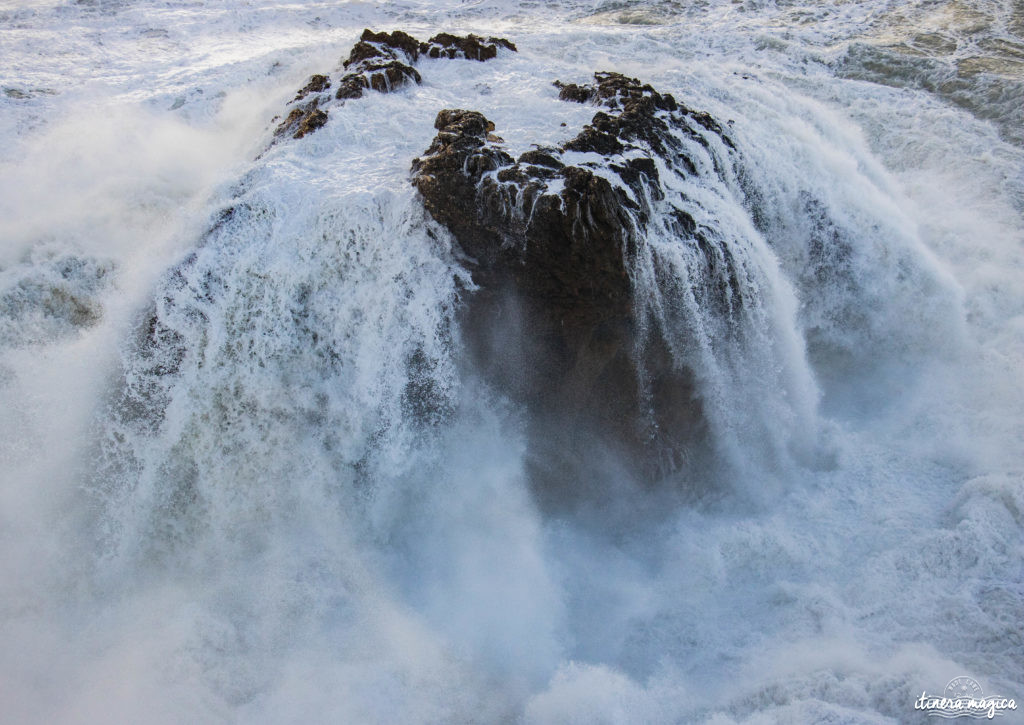 The biggest waves in the world: a sight I won’t ever forget

Why Nazaré? Because of an underwater, 1600 feet (500 meters) deep canyon facing Praia do Norte (North Beach), which multiplies the power and height of a swell. Deep currents come from the open ocean and suddenly face this huge underwater cliff – they then surface like an angry cobra and create the biggest waves in the world.

Sometimes it’s hard to tell on pictures how big the waves really are, how impossibly big. Just look at the black little dots on my pictures. They are big wave surfers and security team jet skis. They will reveal the scale. You see an ant next to a skyscraper. I can’t imagine the amount of recklessness and courage you need to go out in the water and ride such infernal creatures.

I can barely convey the terrifying majesty of such a vision, when the ocean crashes in deafening thunder, and even pictures can’t fully do it justice. Seeing the biggest waves in the world is a truly overwhelming experience, it will send shivers down your spine. I saw people in tears or in prayer, humbled by this otherworldly display of Mother Nature’s power. It was a real emotional roller coaster for me too, and my heart was out of control, beating along with this white water rising and crashing onto the endless surface. There is only other experience I can compare this with: seeing Kilauea volcano erupting in Hawaii. Raw nature power. Sublime, unspeakable beauty. Awe and rapture. You feel dwarfed, crushed into nothingness by the mighty universe, and still exhilarated, so incredibly lucky to be alive. During this glorious Tuesday when I saw Nazaré erupting in white water, I couldn’t stop thinking: “Thank you. Thank you for the feet that brought me here and for the eyes that can see this magic. Thank you for this one life.” 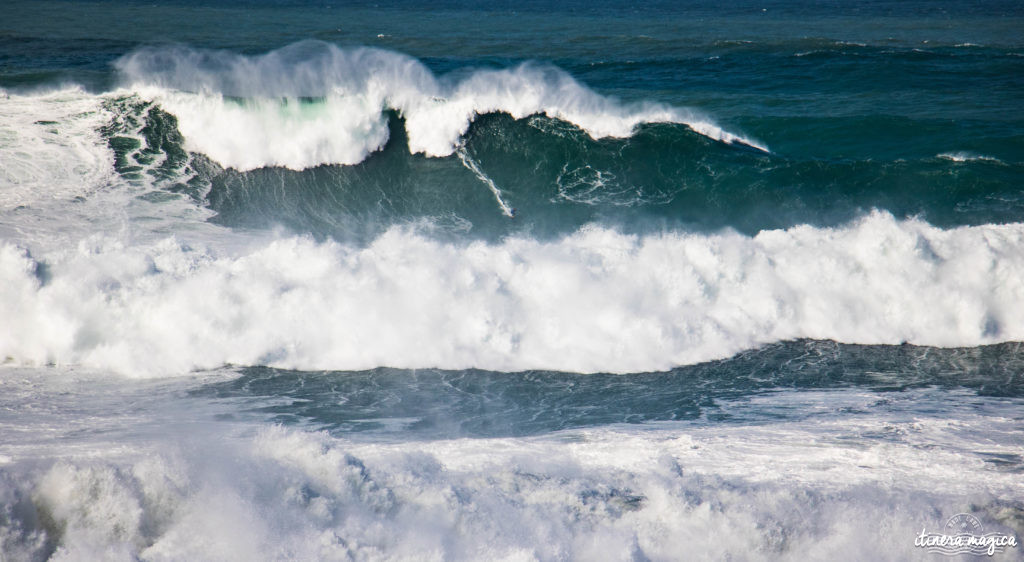 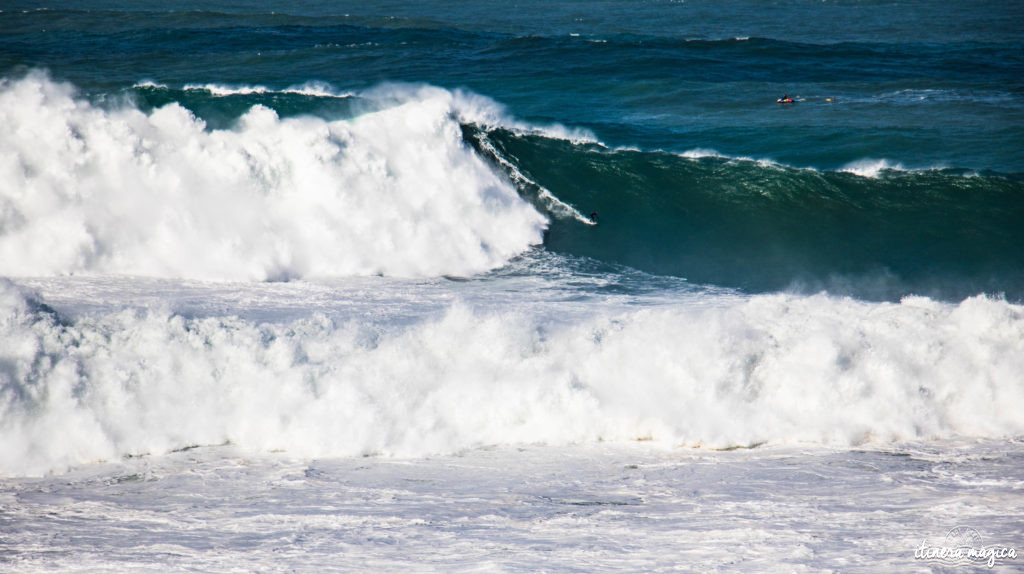 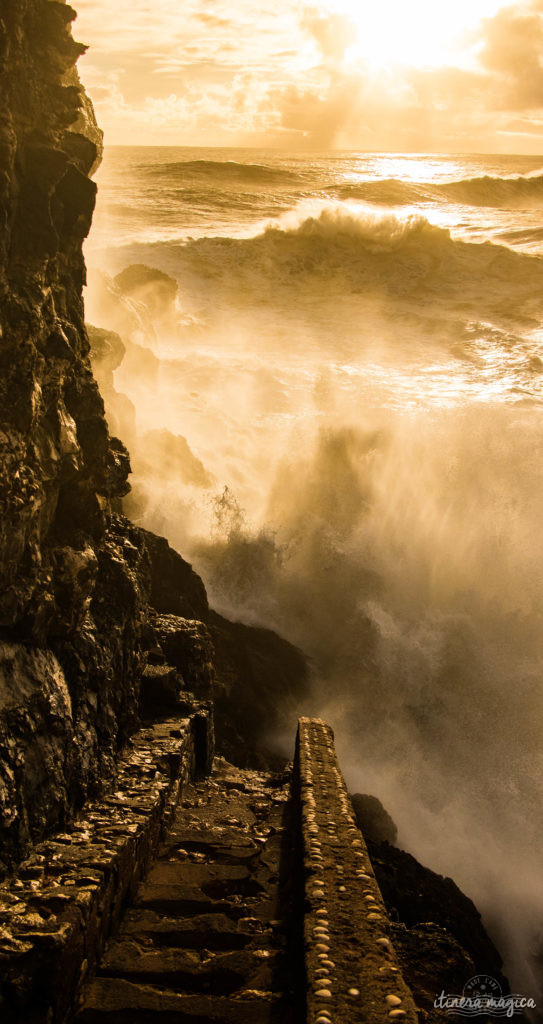 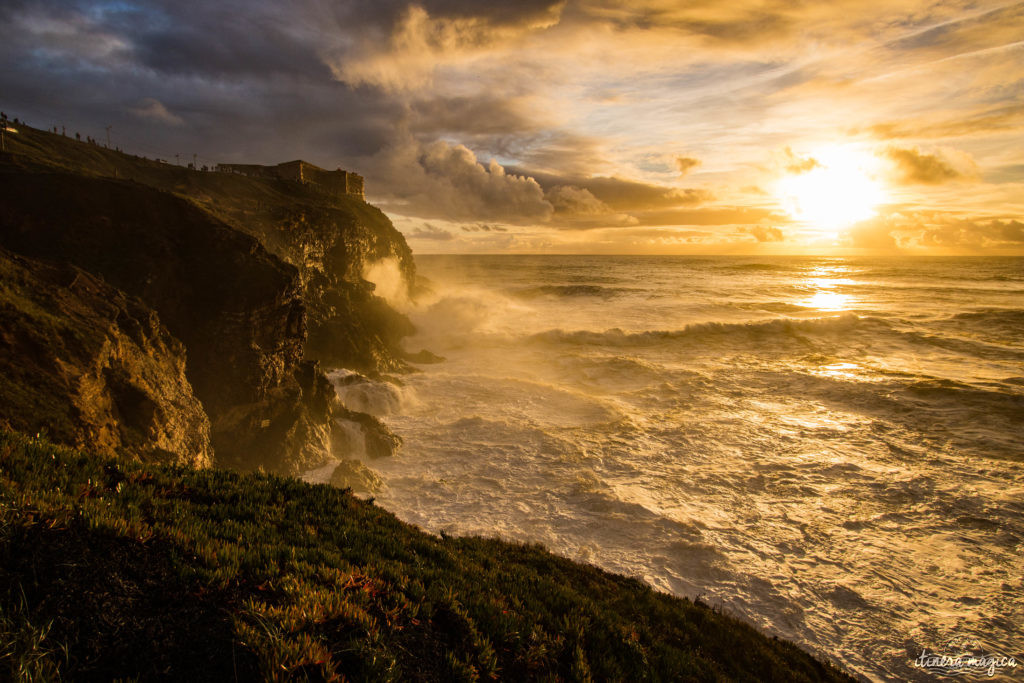 But you don’t have to believe me: you can see it for yourself.
Nazaré is the very best place in the whole world to see giant waves. Here is a quick guide to seeing 100 feet record-breaking waves in Nazaré.

Where is Nazaré and how to get there?

It’s a very lovely little town on the coast of Portugal. You have to drive 1 hour and 30 minutes from Lisbon, or 2 hours and 30 minutes from Porto. Simply take a plane to Lisbon or Porto, rent a car and drive to Nazaré. But the key is to go there at the right time….

When can you see giant waves in Nazaré?

Winter storms will awaken the monsters. Surfers are keeping an eye on Nazaré from late October to late March approximately. In the heart of winter (January-February), it’s often rough in Nazaré. But to see 50-100 feet waves, the real thing, you have to wait for very specific conditions…

How will you know when the monster waves are coming?

You have to follow surf forecasts on websites such as Windguru or my personal favorite, Magicseaweed. I knew the giant waves were coming thanks to Magicseaweed’s Facebook page, and I also follow the founder, Ben Freeston, on Instagram and Twitter. But you can have a look at forecasts directly on Magicseaweed’s website.
You have to react quickly and be a bit flexible (or lucky): you will know the perfect swell is coming approximately 3 or 4 days in advance.
Another very useful website is Nazaré Waves: it features a live webcam.

What is a good forecast for giant waves?

Big waves are like a magic spell or a wizard’s broth, precise numbers are expected.

* The swell has to be at least 6 meters (20 feet) big. Nazaré’s underwater canyon will multiply the swell three times or more.

* The interval between two waves, or period, has to be at least 14 seconds long – the longer, the better. It enables the waves to store more energy and to go higher. Doubling the period means doubling the height.

* The waves have to be oriented westward or northwestward, facing the shore.

* The wind has to be weak and come from the coast: it will deepen the wave and make it reach better heights.

Where exactly in Nazaré do the waves come?

On North Beach, Praia do Norte. The (lovely) city is built facing the ocean on the main beach (Praia da Nazaré). When you’re on the main beach, you’ll see a big cliff on your right, with a red lighthouse at its tip (Farol da Nazaré). You can reach Praia do Norte simply by driving directly there (you can park), or by walking from the city center and taking a cable car which will bring you up the hill. Then simply walk down to the lighthouse. The waves break around the lighthouse, and it’s the best spot to see them. But the cliff above the lighthouse is also a nice place to take some global shots, and a last spot is interesting: down the lighthouse, there’s a stairway leading you close to the water, on some ocean terrace. This is where I shot the “foam on the rocks” pictures from.

What makes Nazaré so unique is the fact that the waves are so close, so accessible. Big waves often break in remote places, far away from the shore – not here. The monsters will come and eat in your hand.

Where shall you sleep?

Many people rent a van and park on North Beach. I wouldn’t advice camping in a tent: it’s winter, it can get really cold, even in Portugal. But a van sounds like a good option.

You won’t find hotels on North Beach, but in the city center. I slept in Hotel Praia, which was 50 meters away from Nazaré’s main beach and had a rooftop pool and terrace where you could see the ocean. The rooms were lovely, breakfast excellent, and I paid 55 euros.

Did I tempt you? Will you go to Nazaré? 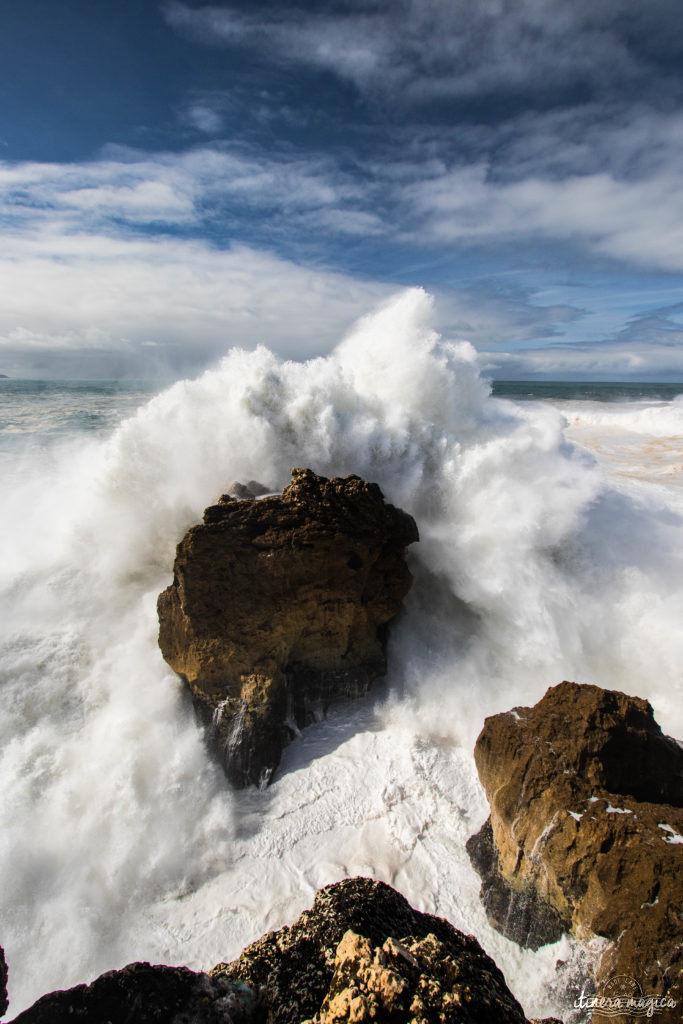 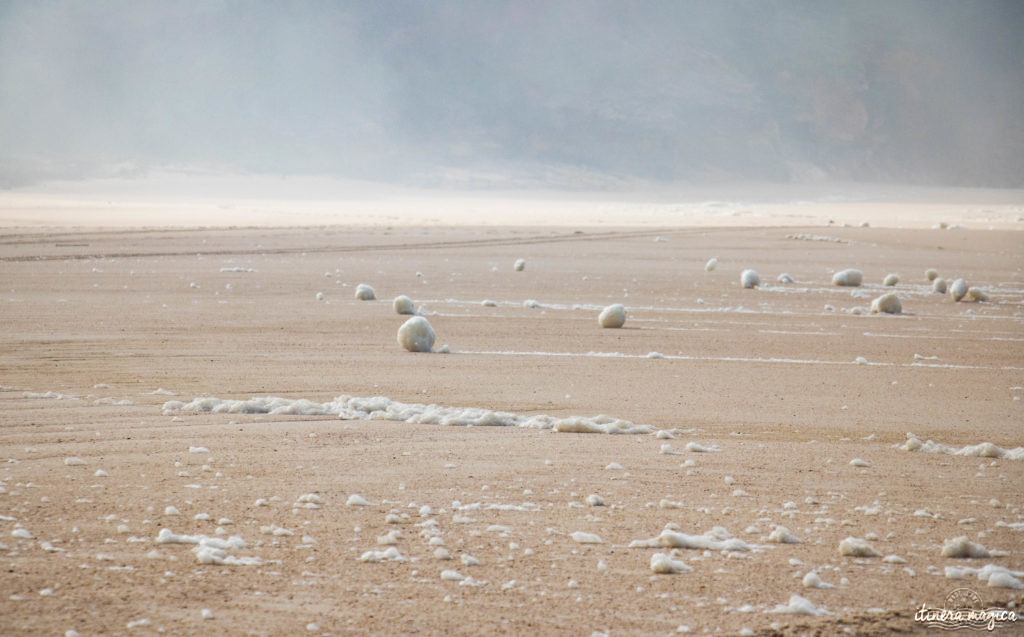 Foam balls on the beach 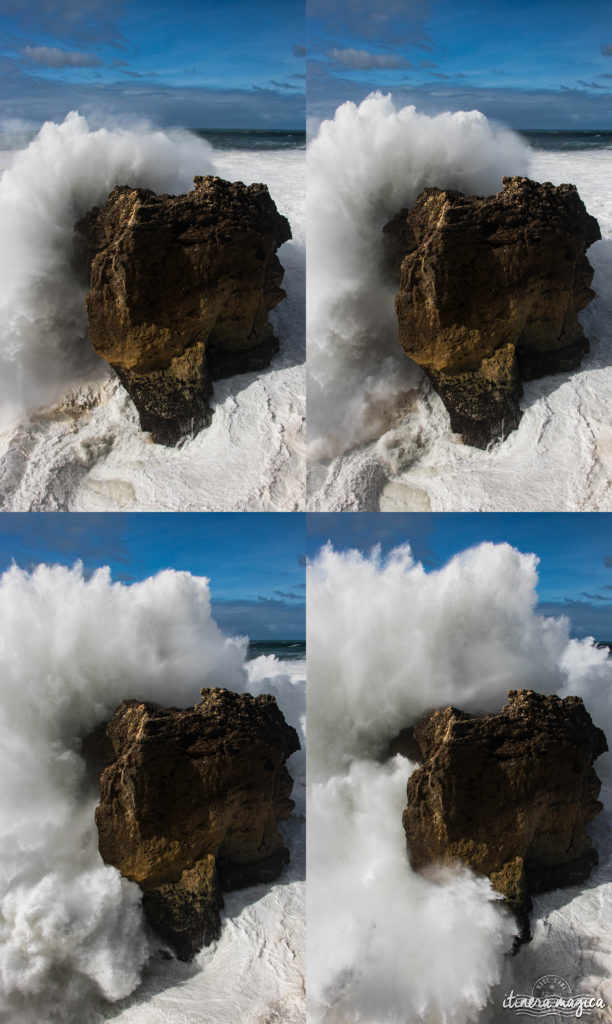 In a few moments… 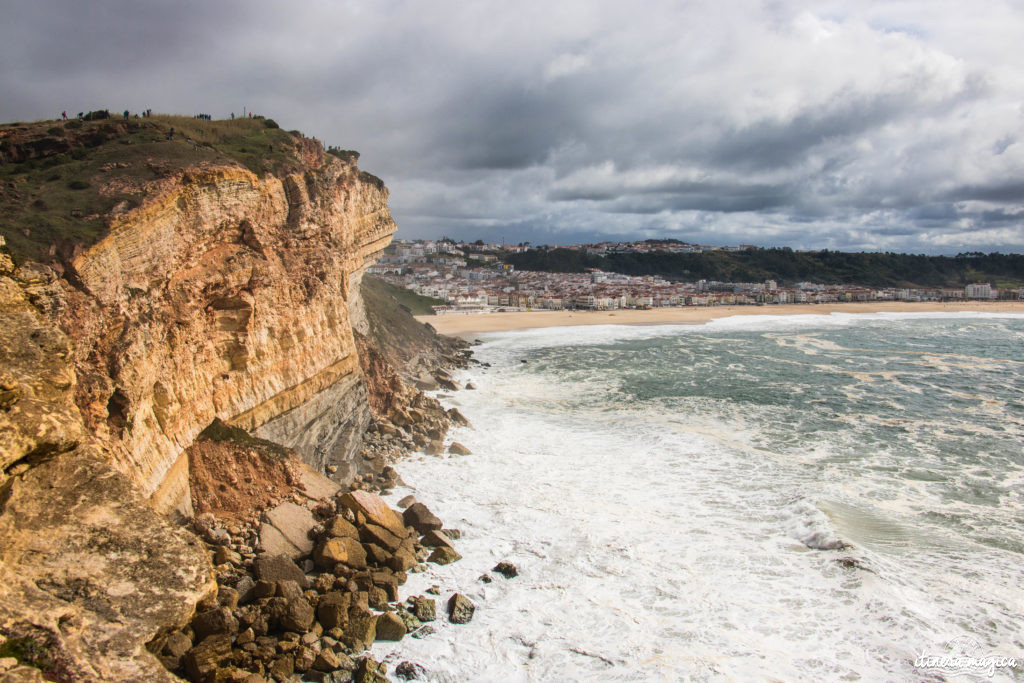 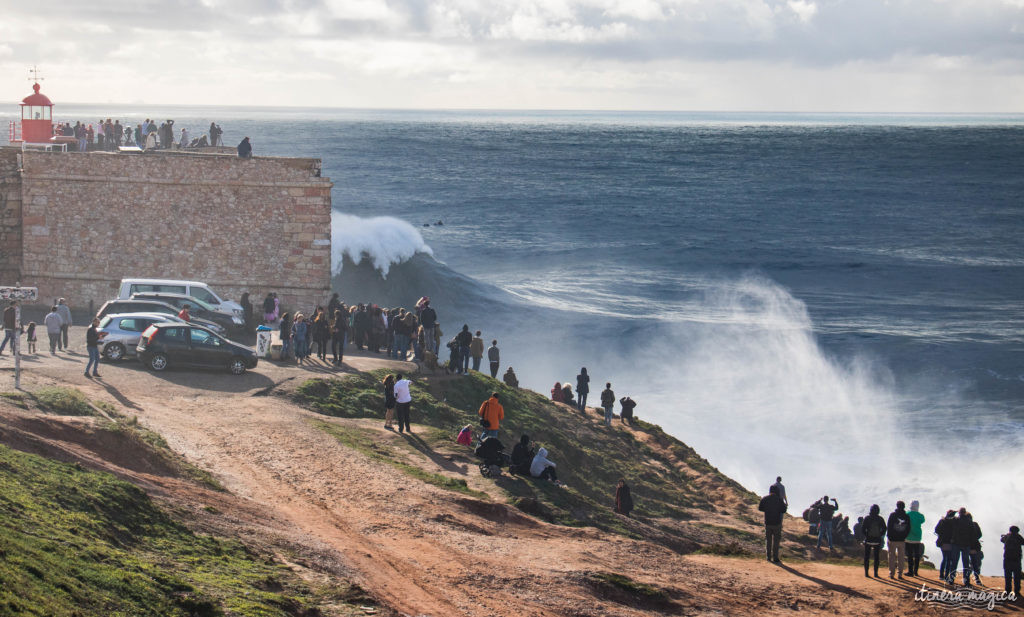 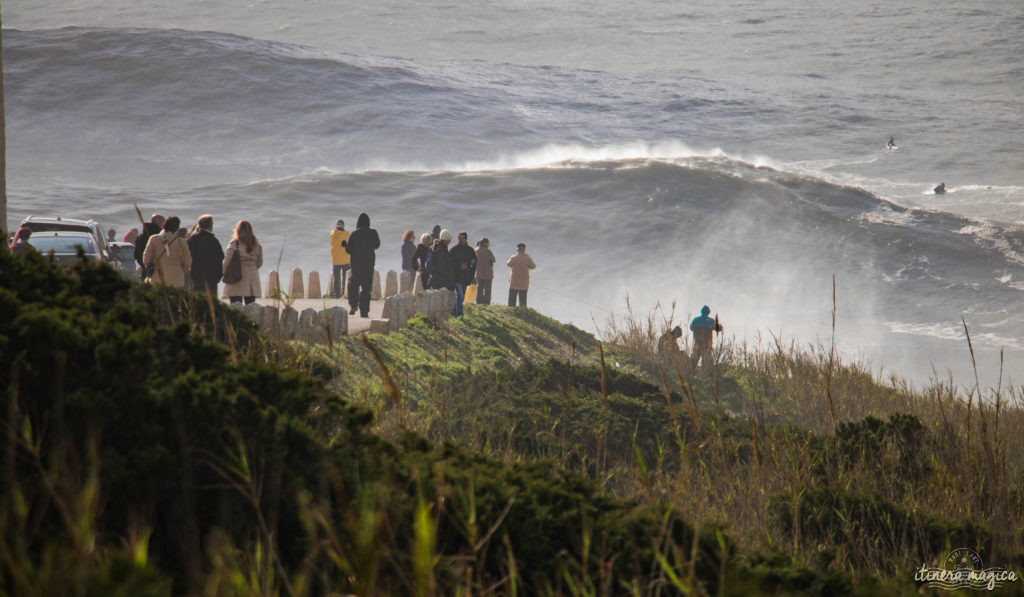 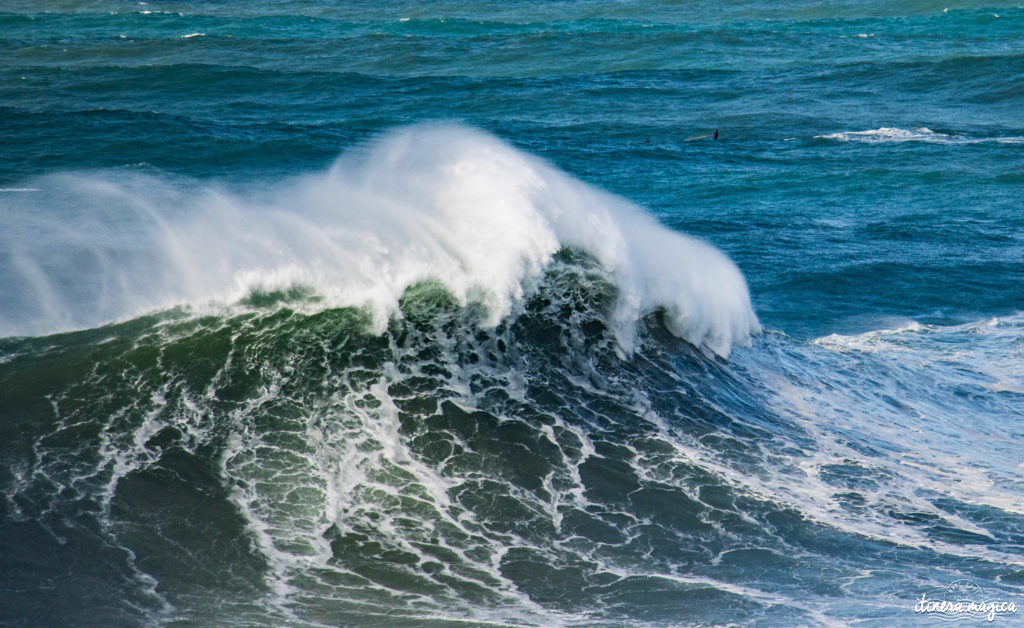 Jaws of the sea 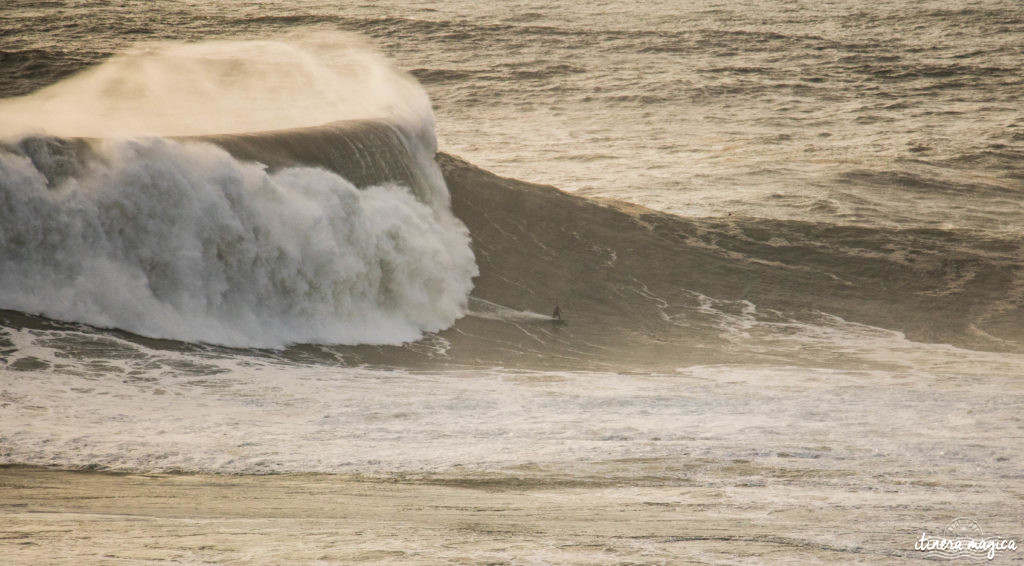 Ride on and don’t look behind!